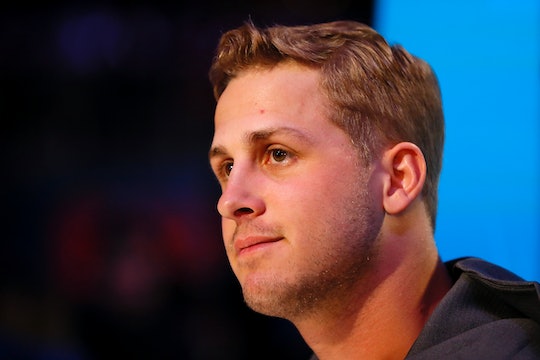 Who Is Jared Goff's Girlfriend? The Quarterback Isn't Single

During the Super Bowl on Sunday, people watched as Jared Goff from the Los Angeles Rams worked hard as the team's starting quarterback. But watching him play in the field at work brought up a lot of questions as to what he's like at home (naturally). So, of course, someone had to be wondering on Sunday night — who is Jared Goff's girlfriend? Let's just say that the quarterback is reportedly off the market.

Most people know that Tom Brady is the quarterback for the New England Patriots. But a lot of people still don't know who Jared Goff is, the quarterback for the Los Angeles Rams, which faced off against Brady on Sunday night. After the Rams' performance on Sunday, people will definitely want to know more about Goff and his personal life — because those details are so much fun.

For those who are unaware, here are the basics. Goff is young — he is only 24 years old and has just been playing football professionally for three years. He joined the Rams in 2016, according to the Los Angeles Times, and has quickly become a star player.

But that's not what people really want to know. They want to know about Goff's personal life and who he is dating. And he is reportedly dating someone — a model named Christen Harper, according to Express.

But there is one key sign that the two are dating. On Sunday, Harper took to Instagram where she shared that she was in Atlanta for the Super Bowl, cheering for the Rams, and sitting on the sidelines (practically on the field). Seats like that belong to very special people — like, the people who are dating the star quarterback. If people had doubts that Harper was dating Goff, this kind of puts those doubts to rest.

If they're not dating, then they're definitely close friends.

So who is Harper? Not many people seem to know. The 25-year-old is a swimsuit model with a pretty big following on Instagram — she currently has over 200,000 followers and they're growing. She is super pretty and seems like a pretty nice girl.

But it's unclear if Goff is even looking for a serious relationship at the moment. In 2017, Bleacher Report labeled Goff as "single and not ready to mingle" — the quarterback told the publication that he had "zero plans" to become a celebrity or enter a public relationship. Goff told Bleacher Report:

Do you think Tom Brady is with Gisele if he doesn't win a Super Bowl? No. There's nothing that matters if you don't win games. It's just like if you're an actor or actress or a rapper or anything. If you don't produce, people won't care.

But a lot can change in two years. And Goff could very well be singing a different tune now, especially since he and Harper have become more public with their friendship. And after the Super Bowl on Sunday, only time will tell if the two decide to make it Instagram official.