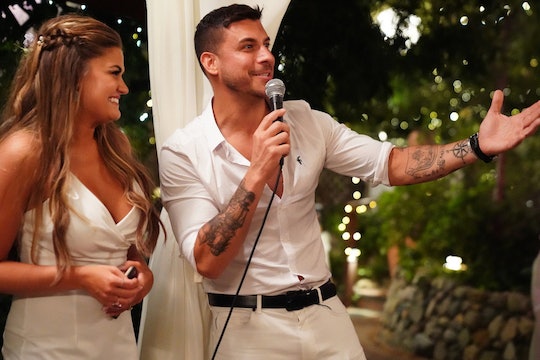 Jax's Sister Loves Him Unconditionally — Even On His Worst Behavior

Hard as it is for me personally to believe, it looks like Jax and Brittany's wedding plans are still chugging right along, up to and including an engagement party in which both Jax and Brittany's families appeared to take this engagement seriously. Jax found a particularly supportive voice from his sister — a person I didn't know existed before now. Wait, so who is Jax's sister, Jenny? Is she a good influence on hashtag New Jax? I suppose only time will tell. In the meantime, I decided to do a little detective work because, well, because this is technically my job.

After some light digging, it appears that my original instinct that Jenny is way more chill to hang out with than her reality star brother appears mostly correct. We are also from the same area in Michigan so I automatically like her. According to Jax she and his mom both own hair salons where they love to gossip and "talk about reality shows" indicating their approval of his role on Vanderpump Rules. She apparently got married in May of 2018, where her brother Jax walked her down the aisle since their father had recently passed away. Oh, and her last name is not Taylor it's Cauchi — which is Jax's real last name (the more you know!).

It's very clear that Jax's relationship with his sister is particularly important to him — especially since he lost his father and his relationship with his mom is going through a rough patch. On Twitter in response to a fan Jax said his sister Jenny was "his rock." And it's totally understandable! Jax has been going through a hard time on the show since his dad died, and I'm glad he's got somebody on his team (even though I am now and forever Team Brittany in all things). As for Jenny's own life — it's clear she's about as far removed from the LA modeling and reality show scene as it's possible to be.

A quick glance through her Instagram shows that Jenny is a big fan of family, Michigan, the lake (as all Michigan people are) and funny memes. In a touching tribute to her brother on his birthday she posted a collage of photos of the two of them and wrote:

Happy Happy 39th Birthday to my brother! We have had a testing year and I am beyond grateful I have you to lean on when times get rough and to laugh with at stuff no one else thinks is funny. I know Dad is looking down on you today and is proud of the man you have become and the man you continue to grow to be. I love you always.

OK that touched even my cold, dead heart. I have not been the hugest fan of Jax in the past for reasons that should be beyond clear to anyone who is a fan of this show. His treatment of women, for example, definitely leaves something to be desired. But now seven seasons later I have to admit that he seems truly earnest in his desire to turn over a new leaf. And however legitimate Brittany's father's concerns about Jax are, at least Jax has Jenny to back him up. In one of the realest pep talks I've ever seen delivered on this show Jenny says, "You're my brother and you f*ck up a lot. But I love you and I'm gonna be in your corner whether you're a dick or you're the nicest person in the world."

And you know what? That, my friends, is real love.