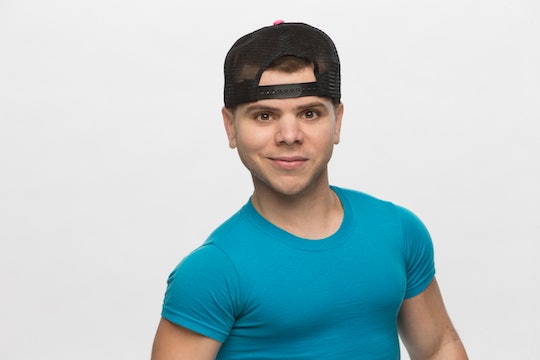 Big Brother returns on June 27 for its twentieth season, so it’s time to prepare yourself for a summer of drama and competition. The houseguests will be competing for the grand prize of $500,000 dollars, and will do whatever it takes to stay in the house. CBS recently revealed all 16 cast members, but one really seems to stand out. Who is JC Mounduix on Big Brother and what does he plan on bringing to the game this season?

In his cast bio for CBS, JC Mounduix revealed that he was born in Cuba, when his parents moved there from Spain for work. He later moved to Miami and now lives in West Hollywood, California, where he works as a dancer and model. He enjoys “going to the gym, watching movies, and going to theme parks.” JC also revealed a few fun facts about himself, including the fact that he is really 4 feet 8 inches tall, he has a “short fuse” when it comes to his height, and he was nearly fired in the middle of a dance performance. How does one get fired mid-dance? I would love to hear JC tell that story.

When talking to Ross Mathews in an interview, JC explained that he’s not just a professional dancer, he also is in charge of event production, for which he throws parties and provides entertainment for clients all over the world. Sounds like an awesome gig, but enough about his professional life, what about his love life? When Ross asked him about any possible “showmances” this season, JC revealed that he’s gay and single, but plans to strictly concentrate on the game without any romantic distractions. He said:

But for all his fun-loving energy, JC is no dummy. He actually has a pretty viable strategy for winning the game, and plans to implement it against his cast mates in the house. When asked if he had a game plan to make it to the end, he revealed his slick way of getting everyone to like him, noting, “I am going to be the sweetest small guy that everyone would want to hug and kiss.”

In an interview with Entertainment Tonight Canada, JC revealed that despite being an energetic person who loves to talk, he plans on trying to be really quiet and helpful so that he can fly under the radar until the end. “I’m just going to go in there and not try to be this super amazing player, this super amazing guy,” JC explained. “I’m just trying to prepare myself mentally to be quiet.” He added that he plans on being the “baby of the house” and “killing them with kindness” so his cast-mates won’t ever think of sending him home.

His strategy seems to be a good one, because if you can get on everyone’s good side, the chances are you’ll stick around to the end. But once he gets into the Big Brother house, all bets are off. It’s not easy to live in complete isolation from the world — no phone, radio, television, or internet — with a bunch of strangers you can’t trust. That situation can turn even the sweetest of people upside down, no matter how much they planned and prepped. I hope JC sticks to his guns, because he comes across as a sweet, likable person, and it would be awesome to see him win in the end.

Along with JC, It looks like the producers have picked a cast full of big personalities for Season 20, which means there will be tons of action and drama in the house. It’s going to be one wild summer, so get your DVRs ready, because Big Brother 20 premieres on Wednesday, June 27, with new episodes airing on Sundays at 8 p.m ET and Wednesdays and Thursdays at 9 p.m ET.