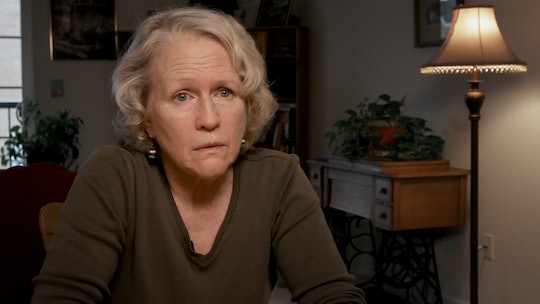 This Former "Jane Doe" Is Speaking Out On 'The Keepers'

Given the success of the Amanda Knox film and Making a Murderer, it's no wonder that Netflix is adding to its true crime library with the upcoming series The Keepers. The seven-part documentary depicts the 1969 cold case of Sister Cathy Cesnik, a 26-year-old Baltimore nun who went missing and was later found dead. Her murder remains unsolved, but the series tracks the recently-renewed investigation of the crime by several of her former students. One Archbishop Keough High School alum is at the center of the investigation, leading many to wonder: Who is Jean Hargadon Wehner on The Keepers?

Wehner is one of the stars of The Keepers and had a key role in reopening the inquiry into her former teacher's death, decades after the case had been deemed cold and was abandoned. Director Ryan White even referred to her as the "lynchpin" in an interview with People about the upcoming show, calling Wehner, "a really brave woman who's been trying to tell this story for decades and has been silenced."

Previously, Wehner was known only as "Jane Doe" when she came forward to accuse Father Joseph Maskell of abuse. (Maskell was the chaplain of Keough (the all-girls Catholic high school where Wehner was a student and Cesnik was a teacher). Maskell also served as a counselor to Wehner and other young women in the establishment. She and another victim ("Jane Roe," later revealed to be Teresa Lancaster, another Keough alum) filed suit again Maskell in 1994, though the case was thrown out upon appeal in 1995, citing an expiration of the statute of limitations in reporting sex abuse crimes. Maskell (shown below on the left) died in 2001, never having been convicted of a crime.

But you may be wondering what Wehner's story has to do with Cesnik's death. According to Wehner and other Keough victims and alums featured in The Keepers, Cesnik lost her life because the girls had confided in her about Maskell's abuse. They believed that their beloved teacher was going to come forward about the abuse and that she paid the ultimate price before she could do so.

According to The Huffington Post, Wehner came forward in 1994, decades after the crime, to say that Maskell had allegedly taken her to see Cesnik's recently-deceased body shortly after her disappearance and weeks before it was recovered by the authorities, using Cesnik's death to threaten then 16-year-old Wehner against coming forward and reporting the abuse. (In the eyes of the law, however, Maskell was never convicted of any crime revolving around Cesnik's death.)

A Baltimore Sun article from June 1994 reported that Wehner (then referred to as an anonymous 41-year-old woman) had told authorities details about the condition of Cesnik's corpse that were known only to investigators at the time — not to the public. The testimony in Wehner and Lancaster's 1994 case was enough to reopen the investigation, according to HuffPost, but it once again went cold after Maskell fled to Ireland and law enforcement dropped the investigation into his possible involvement.

But over 20 years later, Wehner remains dedicated to the search for the truth about Cesnik's death and has been joined by other Keough students and Maskell victims, forming the basis of the upcoming true crime show.

Whereas the identity of the killer at the center of Netflix's other true crime success, Making a Murderer, remains in doubt, I'm hoping that The Keepers manages to uncover enough new evidence for the authorities to successfully ID Cesnik's murderer. White has even suggested that this is possible, telling People in the same interview, "I finished this project thinking this murder can be solved." Unfortunately, even if that happens, it's unlikely that the perpetrator will ever see justice for the crime — so many of the alleged suspects are already deceased.