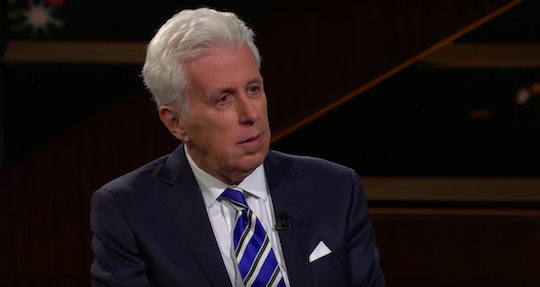 In the midst of a time when it is not uncommon for politicians to either misinterpreting or reinterpreting history to the point of insult, often on national television, a political commentator on one of the U.S.'s largest news networks joined the ranks. On Thursday morning, one of CNN's commentators referred to President Donald Trump as the "Martin Luther King Jr. of healthcare." Who is Jeffrey Lord? This isn't the first controversy for the former Republican aid and author.

When I was a kid, President Kennedy did not want to introduce the civil rights bill because he said it wasn’t popular, he didn’t have the votes for it. Dr. King kept putting people in the streets in harm’s way to put the pressure on so that the bill would be introduced. That’s what finally worked.

A request for comment by Romper to Lord at CNN was not immediately returned. The morning's other commentator, Sanders, immediately called Lord out on the comparison and she didn't mince words, according to CNN:

Jeffrey, you do understand that Dr. King was marching for civil rights because people that looked like me were being beaten. Dogs were being sicked on them. Basic human rights were being withheld from these people merely because the color of their skin. So let's not equate Dr. Martin Luther King Jr., a humanitarian and Nobel Peace Prize winner, to the vagina-grabbing President Donald Trump.

This isn't the first time Lord has provided controversial racially-charged commentary that even his most conservative colleagues disapproved of. In a story for the American Spectator, Lord claimed that Shirley Sherrod's account of her relative's lynching was false. The criticisms of Lord's argument were intense, with many calling his justification "profoundly ahistorical." Not dissimilar to Press Secretary Sean Spicer's claim that Adolf Hitler didn't use chemical warfare (he did), Lord's claim that the account of lynching was not, in fact, a lynching primarily showed that he did not understand the breadth and inclusivity of the term to describe the myriad forms of violence committed against Black communities throughout American history.

Lord also wrote commentary for the Spectator that compared former President Barack Obama's campaign slogan to that of the Hitler Youth and Communist China. Lord emerged as an influential Trump supporter early in the election, and after the publication of his book "What American Needs: A Case For Trump" has thus been dubbed a "Trump defender" by the media and fellow commentators.

Lord lives in Pennsylvania, from where he generally provides his commentary. He first appeared on Trump's radar back in 2013 when he wrote an article called "Never Ignore Donald Trump," which prompted the then-mogul to call him up, according to The Philadelphia Inquirer. The rest, you might say, is history — which is arguably not the strongest suit of those at the political forefront.