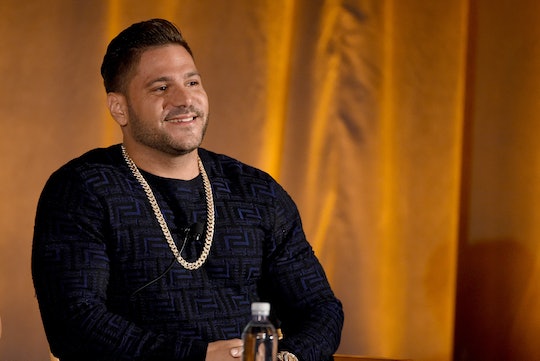 There's about to be a whole lot of changes in store for one of the original cast members of MTV's most infamous reality show. That's right, Ronnie Ortiz-Magro is expecting his first child with his girlfriend, as he shared on Tuesday. But, who is Jen Harley? The Jersey Shore alum's partner is not only expecting, but she's also mysteriously interesting herself.

In case you missed it, the rambunctious show is getting a reboot, fittingly titled, Jersey Shore Family Vacation. And with that comes all of the cast getting together once again, and all of their personal lives and drama becoming part of the general public's knowledge. So, after the news broke that Ortiz-Magro is expecting his first child with his girlfriend, fans everywhere have been clamoring to try and learn as much as they can about the future mother of a sure-to-be fist-bumping baby.

While Harley is already a mother to her own 11-year-old son, according to Us Weekly, this experience with Ortiz-Magro is certainly on track to be interesting. Currently, Harley has yet to post about the pregnancy to her own Instagram page, which is now set to private, but Ortiz-Magro took to the social media site on Tuesday to share the happy news himself.

In his Instagram post announcing the exciting news, which featured Harley and himself standing out in the cold, with Harley's pregnancy bump on full display, the 32-year-old reality star wrote, "Thank you to everyone who has been supportive with advice & encouragement. People keep saying becoming a parent is the part of life. I’ve been blessed enough to have SOO MANY best parts of my life."

Previously, the reality star had only posted a mysterious photo of the happy couple dancing at night with the caption, "Things in life never goes as planned or ever happen the way you expect it!" According to Entertainment Tonight, Ortiz-Magro's Jersey Shore cast mates are all pretty supportive of his happy news, as Nicole "Snooki" Polizzi liked the post, while Mike "The Situation" Sorrentino commented, "God bless," with a prayer hand emoji. But, that's all beside the point. What fans really want to know is just who Ortiz-Magro's girlfriend is, and how the couple met.

Harley is reportedly six months along in her pregnancy with a baby girl, and the two have been together since February of 2017, according to Us Weekly. Both have shared photos of themselves together on their social media pages, and appear to be living a pretty happy and full life.

But as for Harley herself, her life seems to be somewhat of a mystery. While it's known that she has a son from a previous relationship, as Us Weekly reported, that appears to be all that's out in the public sphere for now. However, according to her now-private Instagram page, Harley appears to live in Las Vegas, Nevada and has posted a few promotional photos for events and companies.

While my grandma might balk at the idea of a person being an Instagram model or social media star as a full-time occupation, that's actually a totally feasible way to make money nowadays.

Of course, because her social media accounts have since been made private, it's difficult to confirm if that's even what Harley's actual job is, or if she does something else. Before Harley changed her privacy settings on Instagram, it appeared that she only posted photos to her page every couple of weeks, which is nothing compared to what some other reality stars do (I'm looking at you Kardashian-Jenner family). And that might actually be intentional. Harley reportedly already has a son, and now she's dating (and expecting with) someone very much in the public eye. Really, it's totally understandable that she would want to keep her private details to herself as much as she can, at least for now.