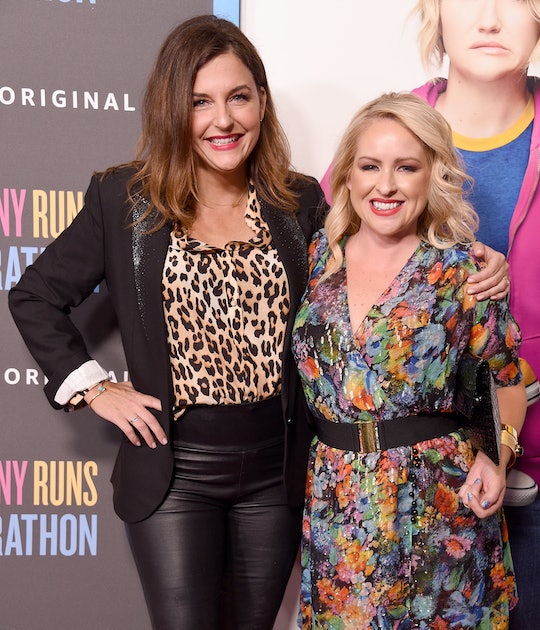 What happens when two Nebraska moms take their "mom-ing" to the internet? You get the hilariously honest web series IMomSoHard, which went viral immediately after its 2016 launch. The comic duo is made up of Jen Smedley and Kristin Hensley and their videos have spoken to the moms of the world. Even if you happened to catch one of their more famous videos, "I Spanx So Hard," there is a lot you might not know about the comedians. So who is Jen Smedley and why is IMomSoHard so relatable?

Before IMomSoHard, Smedley started off as a Nebraska comedian looking for her big break. The mother of two began performing at Omaha’s Funnybone when she was 16, according to Omaha.com. She then pursued acting when she moved from Bellvue to Los Angeles. Smedley has starred in commercials, TV shows, and movies.

Her story is eerily similar to her best friend and series partner, Hensley — even the part about living in Nebraska, going to the same school, and having mutual friends. I'm pretty sure this is the epitome of kismet. Ironically, the two didn't meet until both moved to Venice Beach, California to do the standup thing (separately). In another twist of fate, Smedley and Hensley performed back-to-back at a comedy club, each listening to the other's take on Nebraska, and their friendship was born. "I think we thoroughly enjoy being around each other," Hensley told Omaha.com. "So having conversations is really fun. Plus, I think there’s this idea that women are really fragile, and you can’t, like, flip each other guff. But we give each other a hard time all the time."

Obviously, Smedley's acting dream gradually shifted focus for a reason she couldn't see at the time, or IMomSoHard wouldn't exist. Their candid videos caught on fast with 20 million views in four months. Their Facebook page has well over a million likes and it's easy to see why the series gained in popularity. Smedley and Hensley talk about real issues plaguing moms like back-to-school season, kids and their germs, and even finding the strength to exercise, because it's a struggle. Smedley has plenty of fodder from the throes of motherhood and I'm sure many can relate. I know I can.

Back in September, 2017, Deadline announced plans to pilot a multi-camera comedy, IMomSoHard, for CBS with former 2 Broke Girls executive producer, Michelle Nader, and Rob Thomas (Veronica Mars). There wouldn't be a show without the original web series, so the project is based on two moms "who show how their friendship gets them through being wives and mothers."

Between the Moms Night Out tour, the duo's book, mom stuff, marriage, and keeping up with all things IMomSoHard, you'd think Smedley would be ready for a break, but she's just getting started. As for advice for all of you moms thinking what these two say, Smedley said, though your thing may not be theirs, don't hesitate. "I think especially for women, there’s a lot of room out there for their voices to be heard and their stories to be told. They should just do it," she told AXS.com.

The IMomSoHard comedy special is now streaming on Amazon Prime.