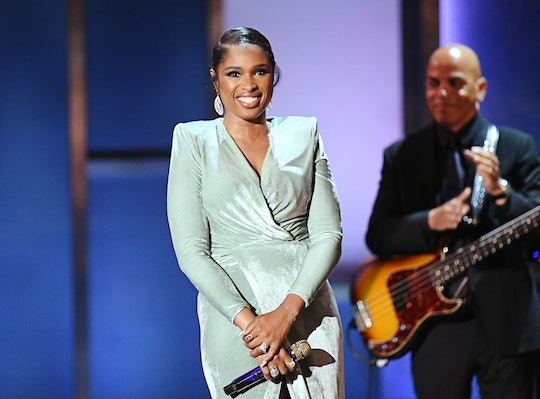 Jennifer Hudson Is Focused On Her Son & Her Career

People viewing the fireworks from the comfort of their own home this 4th of July are going to be blown away by the show. This year Jennifer Hudson has recorded a special version of "Somewhere Over The Rainbow" for the broadcast of the Macy's 4th of July Fireworks Show in New York City, according to CNN. And after watching the incredible performance, people may be curious about who she's celebrating the patriotic holiday with. So who Jennifer Hudson is dating nowadays?

While The Voice U.K. judge and Academy Award winner might be super vocal (literally) about her career, she's a bit more guarded when it comes to her private life. There are some celebrities who like to keep those things in their life to themselves (hard to believe), and Hudson is one of them. Her Instagram account is filled with photos and videos of her performing and sharing a behind-the-scenes look at her life as a musician. There are no photos of her with a partner or anyone that suggests she is in a romantic relationship.

So, it makes sense that Hudson is reportedly single at the moment, according to Heavy, because she has not confirmed whether or not she is in a relationship. And judging by her Instagram, she seems pretty happy about her life as it is.

But that isn't to say that Hudson hasn't been in public relationships in the past. Hudson got engaged to Harvard graduate, former professional wrestler, and VH1 reality show contestant, David Otunga in 2008, after dating for less than a year, according to People. One year after they got engaged, Hudson gave birth to her first child — a son named David Otunga Jr. — in August 2009, according to Reuters. The couple remained engaged for almost a decade without ever taking that walk down the aisle. They announced that they had formally separated in 2017.

Since that public split, Hudson has kept a low profile when it comes to her dating life. In January 2018, it was rumored that she was reportedly dating her fellow The Voice U.K. judge, will.i.am, according to Hollywood Life, but those rumors were never confirmed.

Instead of focusing on her dating life, Hudson has clearly put her child (and her career) first, which is admirable. Hudson has been through enough in the public as it is — in 2008, her mother, nephew, and brother were murdered by her sister's estranged husband, according to Us Weekly. But Hudson told Glamour that she's found the strength to carry on through her son.

In 2015, Hudson opened up to Glamour about this transformative experience and how her son was there to "save" her in the end. "I went from being an aunt, having a mom, and being a child to not having a mom, becoming a mom, and raising my own child," she said. "I tell David all the time, 'You saved my life.'"

And in 2012, when David was just a baby, Hudson told Parents that becoming a mom was a life changing experience for her. "Everything I see, I now see through a mother's eyes," she said. "I always say, you never know how much your parents loved you until you have a child to love."

That unconditional love has carried her through so many hardships in her life. Although she might keep her love life private, the love she has for her son and her impressive career is undeniable.