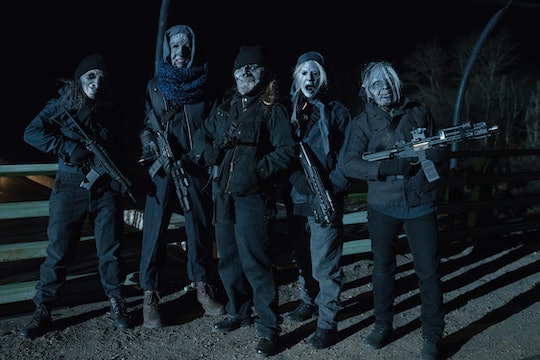 Who Exactly Is Jennifer On 'Dietland'?

New York'Magazine's The Cut called Dietland, the novel, the most "surprising book about women" all the way back in 2015. Which is why it makes perfect sense that writer and showrunner Marti Noxon (Buffy the Vampire Slayer, UnReal, Girlfriend's Guide To Divorce) was so interested in adapting the Sarai Walker satirical novel into a TV show and tell yet another story about powerful, complicated women. In the show and book, a murderous cabal of women that go by "Jennifer" are killing men who have been accused of sexual assault -- or are just generally terrible to women. So who is Jennifer on Dietland and will we ever see her -- er, their -- face(s)?

When the book was first released, it was called a "female Fight Club," which doesn't even really do it justice. AMC describes the plot of show, which closely follows the book, "Struggling with self-image and fed up with how she’s treated by her boss and society, Plum [played by Joy Nash] sets out on a wildly complicated road to self-awakening. At the same time, everyone is buzzing over news reports about men, accused of sexual abuse and assault, who are disappearing and meeting untimely, violent deaths."

The bodies are found marked in some way with the name "Jennifer" and the whole show, in part, focuses on figuring out who the group is. Dietland's Jennifer is akin to Pretty Little Liars' mysterious A. Except we know that there's more than one, because we see them in groups dressed in black and wearing old witch masks. They really go into the whole "coven" thing.

The first time we see Jennifer is when the name is tattooed on the back of a young woman's neck, and we can assume that she's one of the people who brutally murdered the two military vets previously mentioned in the premiere episode. But it appears that Jennifer is more than just one woman here, and that some of the other characters might actually be involved in the group.

In the book, there ends up being a big reveal about the mastermind behind Jennifer, despite original theories about it being a group. (I'm not going to spoil this one for you, don't worry.) Given that some other things are majorly different from the novel, the AMC show might take a different route about revealing who, or what, Jennifer really is and their motives for killing so many men. One thing that's clear from the very beginning is that there's likely a link between that beauty closet at Daisy Chain and Jennifer. Or not, that's the fun, right?

The book was published long before the #MeToo movement, and Noxon told The Atlantic that she first pitched an adaptation almost two years ago. So it wasn't envisioned as a direct response to the current social climate. That being said, it feels ever so timely at the moment. Noxon explained that she showed a male friend an early episode of Dietland and that he was flabbergasted. She said, "He kept saying, ‘Did you know? All this was coming,'" obviously referring to all of the allegations of sexual harassment and gender inequality in the past year. Noxon said in the interview, "Of course I didn’t. But I’ve been alive.”

Noxon does give some insight into Jennifer's motives, though. She told The Atlantic that right now, they "don’t really have a long-term plan. They’re right that it’s good to make bad people really scared, but they didn’t think beyond that. So I have to think that part through.” She added that if Dietland gets picked up for another season, she hopes to explore that more. So if you really, really want to know more about Jennifer, keep tuning in so AMC renews the season.