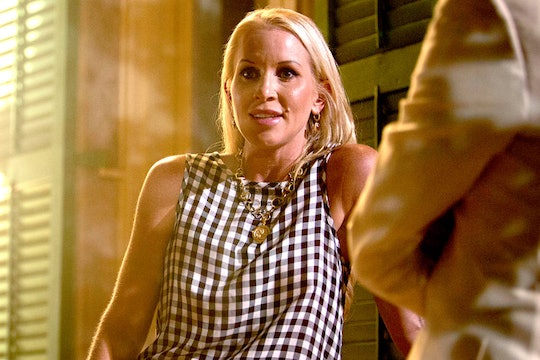 Who Is Jennifer Snowden On 'Southern Charm'? She Has Caused Quite A Stir

There have been many pot-stirrers on any Bravo TV shows, but Southern Charm "friend of the show" Jennifer Snowden might just take the cake. Last season, Kathryn Dennis approached Jennifer about being "the other woman" in her on-again, off-again relationship with Thomas Ravenel. Jennifer denied any type of relationship — specifically saying "nothing ever transpired of that nature" — and thus she was brought into the show as a "regular" friend. This season, we've seen more and more of Jennifer, as she's been one of Kathryn's few allies on the show. So, what is there to know about Jennifer on Southern Charm?

In the episode "Invite-Gate," Kathryn Dennis is once again ostracized by people she used to be friends with during Shep Rose's birthday party. It's sad because it seems like she just wants to be friends with (some) of the cast, and is constantly getting the cold shoulder from them. She probably also feels like she can't trust everyone, either, which isn't that crazy considering loyalties on this show shift back-and-forth like laundry on a clothesline. But can Kathryn trust Jennifer, or is Jennifer only a "fake friend."

Well, K. Cooper Ray, one of my favorite Southern Charm-ers, has an opinion, and he's not afraid to say it. In Monday's episode, Kathryn's confidant (and member of Patricia's inner-circle who has been feeling the cold shoulder by the Flamingo Partier herself since his last interaction with Kathryn) told Kathryn that he didn't trust Jennifer. He points out that Thomas contradicted the "nothing transpired of that nature" stance that Jennifer took, saying that the two allegedly did transpire of that nature while Kathryn was pregnant. It's hard to prove either way since it's a he-said, she-said thing, but either way, there definitely is a reason to be cautious.

Jennifer is actually pretty busy when she's not on Southern Charm. According to her website Bloom Charleston by Jennifer Snowden, she sells real estate and is crazy about interior design. Two things that certainly go hand-in-hand. After a quick glance at her Instagram account, it's pretty obvious that she is incredibly into both.

It also looks like she's still friends with Kathryn, for what it's worth. So, whether Kathryn continued to defend Jennifer, or they got over any issues they've had in the past, it definitely seems like Jennifer is still Team Kathryn and Kathryn is still Team Jennifer. (What that means for Team Thomas is still to be determined.)

Jennifer just recently announced that she is pregnant. According to Bravo, she is due in late September and is already thinking about the name James (it's a boy!). The good news is, now Kathryn's two kids have a new person to play with!