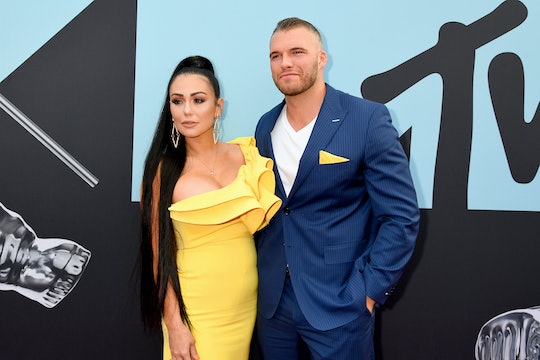 As fans dive into Season 3 of Jersey Shore Family Vacation, they’re learning more about Jenni “Jwoww” Farley’s divorce with Roger Matthews. Now that the split is official, the reality star is moving on with a new man in her life. She’s been talking about him on the show, and gushing over how close they are, but who is this mystery guy? Who is Jenni’s new boyfriend on Jersey Shore Family Vacation?

His name is Zack Clayton Carpinello, and according to People, he’s a 24-year-old pro wrestler from Bethlehem, New York. In a 2017 interview with Spotlight Newspapers, Zack revealed he was featured on Telemundo when he wrestled in the Spanish leagues Consejo Mundial de Lucha Libre and Lucha Libre AAA Worldwide, but he aspires to be in the WWE someday.

So how did the two love birds meet? It turns out they’ve known each other for a few years. As reported by E! News, Jenni is friends with Zack’s sister, who he attended her wedding to Roger with back in 2015. If you scroll through his Instagram, you’ll find a post from 2016 in which he shared a picture from the wedding and gave a shout out to Roger and Jenni on their anniversary. “One year ago at #WowwWedding where I had an awesome time,” he captioned the post. “Awesome weekend! Blessed I was got to be a part- Happy anniversary.”

In a recent interview with ET, Zack and Jenni talked about their relationship, and how they’ve been friends for years. Zack confessed that he always thought she was “really cool” and “very, very pretty,” while Jenni revealed that she’s always had a soft spot for him. "But I loved him way before like, falling in love with him, because I always wanted to see him succeed,” Farley explained. "But even outside of that, I just adore his company. Even if he doesn't like something, he goes above and beyond and wants to experience it with me -- watching like, Game of Thrones, or going to Disney, or doing something fun and interesting. So, it's something I haven't had, which I appreciate."

The couple also mentioned that because they’ve been friends for so long, Jenni’s kids, 4-year-old Meilani and 3-year-old Greyson, are already comfortable having him around. “I've spent a lot of time with the kids," Zack told the outlet. "I've known Meilani for a few years. She's known me for a couple years, she is great with me. I love the kids. They're great."

Through Zack’s Instagram page, you can tell he’s clearly smitten with Jenni, sharing pictures of her calling her the “most beautiful woman in the world” and “the best partner ever.” He told ET that the thing he’s enjoying most about their relationship is the fact that he’s making her happy. "I love that I can make her smile, apparently, like nobody else has ever done before in life, so that's the biggest thing that I love," he said. "That's something I hear from everybody all the time. So, I know there's got to be truth behind it."

On the last episode of Jersey Shore Family Vacation, Jenni told her friends that she was seeing someone, but didn’t reveal who. Hopefully, as the season progresses, she’ll introduce Zack on the show, so fans can get to see the adorable couple up close.