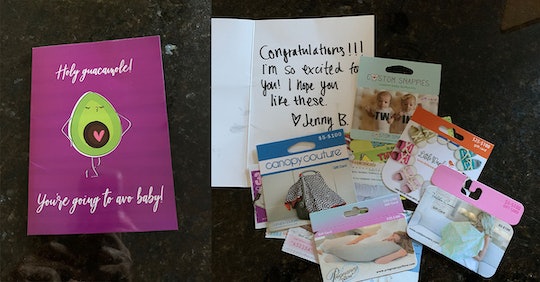 Women, Who Aren't Pregnant, Are Getting Bizarre Pregnancy Congrats Cards In The Mail

Pregnancy is a sensitive topic. If you are expecting, finding the right way to tell your family, friends, and employer is often a meticulously planned out process. If you're not expecting, but are trying to conceive, baby showers and pregnancy announcements can be a huge trigger. And if you're definitely not with child, but someone thinks you are? Well, things can get pretty awkward. Which is exactly why many women are wondering who Jenny B is and why she's sending women cards congratulating them on a pregnancy.

As many have detailed on social media, a woman named Jenny B. has been sending out greeting cards, which are filled with $245 in coupons and gift cards, congratulating women on their pregnancies, according to Fox4Now. Except, most of the time, these women aren't even pregnant. Romper's own social media editor, Lindsey Burns, was among the perplexed women who have received the card from Jenny B. Actually, it arrived at her parents' house on Oct. 25.

"My mom opened it that same day. I was made aware of it when my mom texted me asking if I had anything I needed to tell her," Burns says. "When I expressed confusion — even at age 25, I still frantically thought back to every wrong thing I've done in the past 20 or so years prior, and couldn't think of anything in particular — she sent me pictures of the card and the gift cards."

The cards feature a cartoon avocado on the front and read "Holy guacamole! You're going to avo baby!" And the inside of the card reads, "Congratulations!!! I'm so excited for you. I hope you like these." It's signed simply, "Jenny B."

Burns was "shocked and immediately confused when she saw the mailer because she is "most definitely not currently, or have ever been, pregnant."

Like Burns, it seems thousands of women across the nation have recently received this mysterious surprise mailing.

As one woman shared on Twitter, "i have no idea who jenny b is but she just sent me $300 worth of baby-related gift cards! and now my dad thinks i’m pregnant!"

Another person tweeted, "Who THE HELL IS JENNY B AND WHY DID SHE SEND ME $245 IN GIFTCARDS TO MY CHILDHOOD HOME CONGRATULATING ME ON MY PREGNANCY?! This is literally how my mother thought she was finding out that I was pregnant. I’m calling the FBI."

Meanwhile, another person tweeted, "Just had to talk my mom down off a ledge after some scam artist mailed my home address some pregnancy and baby gift cards. thank u jenny b from utah!!! how’s your tuesday???"

Yet another Twitter user pointed out, "It's a funny anecdote for me, but for couples struggling with fertility issues, receiving one of these could have caused real trauma. So shame on you, Jenny B. of Utah. I hope you didn't pay for a marketing degree because you are truly terrible at it."

The card's origin has been traced to Please Grove, Utah, the headquarters of Mother's Lounge, a wholesale retailer for moms and infants, The Lily reported. And Jenny B.? That would be Jenny Bosco, the founder of Mother's Lounge. Apparently the whole fiasco has been a failed marketing attempt of sorts.

Romper has reached out to Mothers Lounge for comment, but did not immediately hear back. However, Scott Anderson, director of marketing at Mother's Lounge, provided The New York Times with the following statement: "The qualified recipients for this mailer have, at one point, subscribed to an opt-in list for maternity deals and coupons through a third party marketing company. All information from third party companies is only used internally for Mother's Lounge and is not sold or used for anything else other than the direct marketing of Mother's Lounge."

It's worth noting that the Better Business Bureau (BBB) has given Mother's Lounge an F rating, according to The New York Times, and a warning about the company's promotional mailings has also been posted the BBB website.

So, ladies, with all this said, beware. And if you get a mailer from Jenny B., it might be wise to err on the side of caution and simply throw it out.