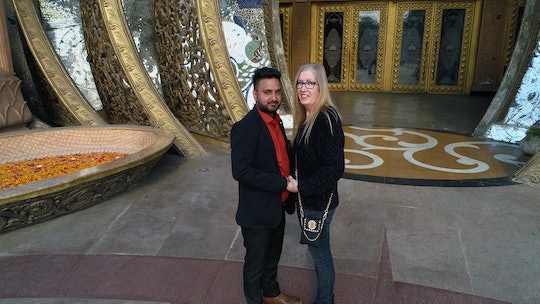 Catfishing Turns To Love For Jenny & Sumit On '90 Day Fiance: The Other Way'

Jenny is a 60-year-old woman from Palm Springs, California who is planning to move to India to be with her 30-year-old fiancé Sumit. According to E! News, she'd made the trip once before, but left early because Sumit's parents didn't approve of her. Jenny and Sumit still want to be together, but it's not going to be easy. In a sneak peek at the upcoming season, Sumit tells his friends that he's planning to keep Jenny a secret from his family. That might make marrying her a little tricky, to put it mildly.

And that's not the only thing complicating Jenny and Sumit's relationship. The way they met was unconventional, even by the standards of the 90 Day Fiancé franchise.

As reported by E! News, Jenny and Sumit's relationship started off as a catfishing scenario. Yep, that's right. She connected with "Michael Jones" on Facebook only to find out he didn't actually exist; she had really been corresponding with Sumit. But that didn't matter once they'd actually met, and she clearly believes in their connection enough to unroot her entire life for him. In another sneak peek shared exclusively by E!, Jenny explained where she was coming from.

"Everyone's entitled to happiness," she said in a confessional. "I thought I found it once, I was married for 15 years. Everything was fine as far as I knew, so when I found out he was leaving me for somebody else, that was a huge blow to my self-esteem. And after my divorce, life was scary. I didn't really think I would find love again, to tell you the truth." That seems to have have changed upon meeting Michael — sorry, Sumit — but learning the specifics of their courtship will have to wait until the premiere.

Jenny has children and grandchildren, but none of the promotional material has revealed how they feel about their mom and grandma making such a drastic move. It doesn't seem like things are a secret on Jenny's end, because she discusses her plans openly in a clip on the official TLC Instagram account. In it, she sits down with her financial advisor to figure out the finer details of moving to a new country. He thought her decision was an "interesting one" and that it would be complicated by her lack of funds; she had around $6k on hand for the move. He also noted that if they were closer friends, he might say that she wasn't thinking clearly — though he didn't put it quite as diplomatically.

Whether or not Jenny's family feels the same way is something that this season of 90 Day Fiancé: The Other Way will hopefully address.