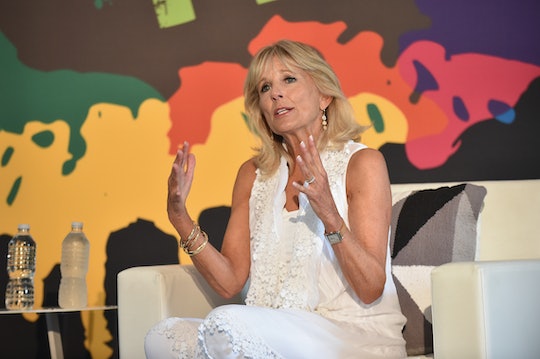 Dr. Jill Biden Has Several Accomplishments Under Her Belt

Former Vice President Joe Biden has his sights set on getting back into the White House, this time as president if he wins the Democratic party's nomination. Now that he is hot on the 2020 campaign trail, people are refamiliarizing themselves with the Biden family, including their matriarch, Jill Biden. So, who exactly is Jill Biden and what could her legacy as a potential First Lady be? Lets take a look back at her first eight years in the White House as the Second Lady.

Prior to her husband being voted into office as the Vice President to Barack Obama, Jill taught English composition and remedial writing at Delaware Technical & Community College for fifteen years, according to NPR. Though many Second Ladies have opted not to hold a paying job while in office, Jill took a teaching position in early 2009 She stuck to her roots by teaching two English classes at Northern Virginia Community College. This is just one of the many ways that Jill — who prefers to be referred to as Dr. Biden — broke the mold as a Second Lady.

In her first year alone as the Second Lady of the White House, Jill made appearances on national television to build care packages for the troops, worked alongside President Obama to raise awareness for the importance of community colleges, and became the face of breast cancer awareness by headlining several events for the Global Race for the Cure, according to Politico. Two years later in 2011, Jill partnered with First Lady Michelle Obama to found Joining Forces, a national initiative to highlight the needs of many American military families.

All of Jill’s accomplishments point to one thing — if her husband, Joe, is voted into office as the President of the United States, she’ll continue to put her considerable efforts towards continuing to help kids and families.

Long before Jill’s accomplishments in the White House, she was hard at work making change in her everyday life. In 1993, after four of her friends were diagnosed with breast cancer, Jill founded the Biden Breast Health Initiative in Delaware.The initiative helped educate more than 10,000 high school-aged girls about early detection, something that seems like it would benefit every teenage girl. One of Jill’s most personally meaningful roles has been as a military mom. Throughout her career as a public figure, Jill has often been seen wearing a Blue Star Mothers Club pin in honor of her late son, Beau Biden, who joined the military in 2003. Beau served as a member of the Delaware Army National Guard, and was later deployed to Iraq in August 2008, just ahead of his father’s election into the White House as Vice President. Sadly, Beau passed away at just 46 years old in May 2015 after a two-year battle with brain cancer.

As of May 2019, Jill was still employed as an instructor at NOVA, though it’s unclear how her career as an educator would be affected if her husband, Joe, were elected into office as the President of the United States. We’ll just have to keep our eyes on the Biden family as the campaign for office in 2020 continues.

Editor’s note: This post has been updated from its original version.