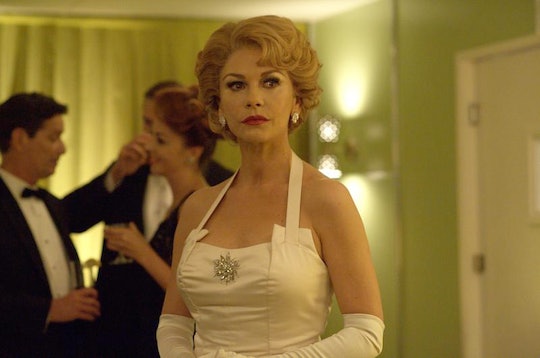 Olivia de Havilland Shared A 'Feud' With Her Sister

Though the central story in Feud Season 1 revolves around the acrimonious, decades-long rivalry of Bette Davis and Joan Crawford, those two women are by no means the only Hollywood legends featured in the latest anthology series from Ryan Murphy. Olivia de Havilland (played by Catherine Zeta-Jones), Geraldine Page (played by Sarah Paulson), and Joan Blondell (played by Kathy Bates) are a few of those figures. Interestingly enough, de Havilland, in particular, had a personal life as interesting as either Davis or Crawford — especially when it comes to her relationship with her sister. But who is Olivia de Havilland's sister, Joan Fontaine?

Born Joan de Beauvoir de Havilland (and adopting the stage name "Joan Fontaine" throughout her acting career), Fontaine was the younger sister of de Havilland. Though de Havilland is still alive (at 100 years old), Fontaine died in 2013 at the age of 96. Both Fontaine and her sister were legendary and critically acclaimed actresses in their time — they remain the only pair of siblings to have ever won lead acting awards at the Academy Awards. Fontaine was nominated a total of three times, winning her Oscar in 1941 by beating out her own sister, who was also nominated that year.

Given that history between them, it's no surprise that the two had a sibling rivalry long-lasting and bitter enough to match that of Davis and Crawford. Unlike the two subjects of Feud, however, Fontaine and de Havilland were not shy about publicly discussing their mutual dislike of one another, such as in the CBC archived interviews in the video below.

According to a Vanity Fair profile on de Havilland, Fontaine followed her big sister into the family business, with de Havilland insisting on Fontaine taking a stage name (rather than sharing the same last name with another, competing actress) before allowing her to move to Hollywood with de Havilland and their mother. From then on, the two competed for the same roles, losing them to one another on occasion. Vanity Fair called the moment when Fontaine beat her sister for the 1941 Oscar, "[t]he moment [that] launched global headlines about 'the war of the star sisters.'"

Ultimately, no one quite knows how the feud between the two sisters began, given that each of them (in public interviews) seem to perceive the other very differently. "Over the years, authors and Hollywood experts have offered various reasons for the feud. Some root it in their childhood — which de Havilland described as tender and Fontaine as difficult — and their mother favoring one sister over the other," PEOPLE wrote in their interview with de Havilland. "Other stories claim the sisters were jealous over men or each other’s successes."

Whatever the cause, it's clear that the de Havilland-Fontaine sibling rivalry would provide more than enough juicy material for a future season of Feud.