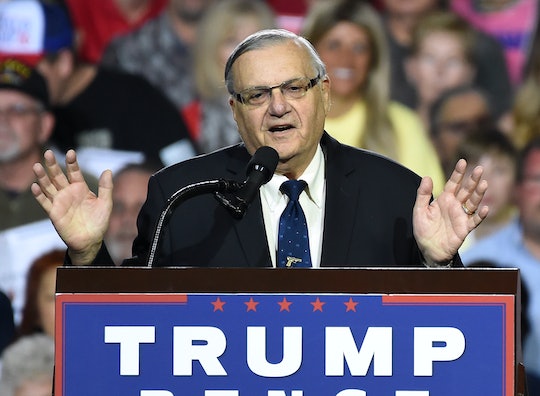 President Donald Trump's not-a-campaign-rally in Arizona on Tuesday night was full of notable moments — the rocks being thrown outside, the blatant revision of history regarding his response to Charlottesville — but perhaps the most highly-anticipated moment were his comments on Joe Arpaio. Since it's impossible to keep up on every news story these days, more than a few people may be wondering, who is Joe Arpaio, and what would Trump pardon him for? According to Trump, the former Maricopa County sheriff is a "great American patriot." But according to a federal judge, he's a criminal guilty of contempt for willfully violating a court order. Let's dig in.

Arpaio served as a sheriff in Arizona from 1993 to 2016 and billed himself as the "toughest sheriff in America." His main claim to fame is instructing local police to enforce immigration policy, despite the fact that jurisdiction lies solely with federal authorities. On Arpaio's orders, Arizona law enforcement officers detained suspected undocumented immigrants without any criminal charges before turning them over to U.S. Immigration and Customs Enforcement. A 2007 lawsuit accused Arpaio's office of racial profiling, charging that Latinos were regularly stopped and detained under suspicion of undocumented immigration status without cause.

In 2011, a federal judge ordered Arpaio's office to stop detaining people for immigration issues when there was no evidence of criminal activity, according to The New York Times, but they continued. Last month, U.S. District Judge Susan R. Bolton found Arpaio guilty of criminal contempt of court. He faces up to six months in jail. A conviction hinged on proving that Arpaio willfully disobeyed the order; his defense was that it was unintended. AZ Central reported that Bolton used Arpaio's own words against him in the ruling, writing that he "knew of the order and what the order meant," yet he "broadcast to the world and to his subordinates that he would and they should continue 'what he had always been doing.'"

Other entries on Arpaio's greatest hits list include issuing prisoners pink underwear and forcing them to live in tents in the scorching heat, sending a publicly-funded posse to Hawaii to obtain President Obama's birth certificate (a year after the White House made it public), and allowing a backlog of over 6,000 untested rape kits to accumulate. Also of note, though it's not widely-known: in the late 1980s, he sold $52,000 tickets for spaceship rides that never materialized, according to AZ Central. Trump didn't officially declare his intention to pardon his fellow birther on Tuesday night, as many expected, but Arpaio probably isn't packing his bags for jail just yet. "Was Sheriff Joe convicted for doing his job?" Trump asked the crowd, according to CNN. "You know what, I'll make a prediction: I think he's going to be just fine, OK? But I won't do it tonight because I don't want to cause any controversy. But Sheriff Joe should feel good."

I think it's fair to say that the controversy has been caused.