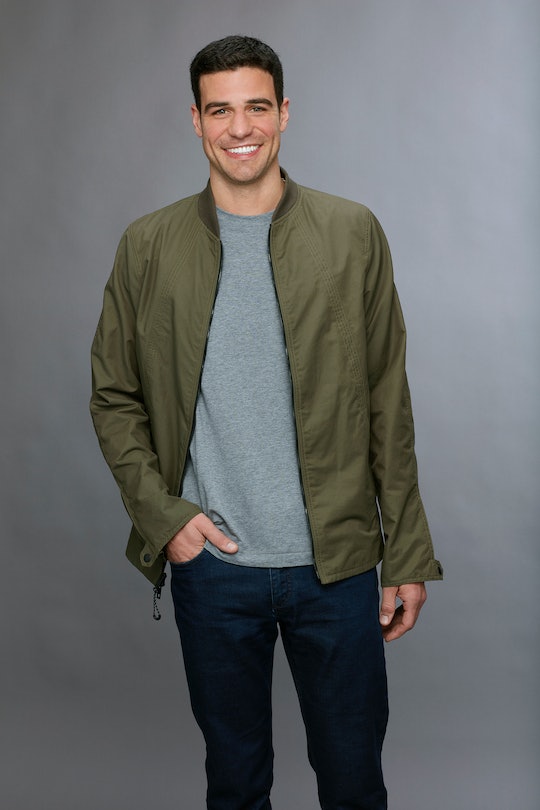 Twitter loves a folksy hero and this season of The Bachelorette boasts a thickly-accented grocer from Chicago to fill that void in Becca Kufrin's crop of dudes. So who is Joe on The Bachelorette? Aside from being full of produce puns, he's formerly one of the youngest traders on the Chicago stock exchange.

We saw Joe's package air before limo arrivals even began on the season premiere, which likely means he's going to be a memorable contestant this season. And he definitely got a warm, sweet, relatable edit on his intro, which is another clue that, in UnREAL terms, at least, he's expected to be wifey material. After some generic B-roll footage of Chicago (statue of Abe Lincoln! the Sears Tower! the L!), we hear in a brutally heavy Chicago accent, "Hi, I'm Joe. Welcome to Chicago." We also learn that he's 31 and owns a grocery store. (Cut to footage of him repricing some grapes. A hands-on owner, at that!)

Joe readily admits that while he's great at identifying bad produce, he's not so great at picking out women (which like, did he just compare his previous partners to rotten tomatoes?). "I deal in produce, but one thing I haven't produced yet is love," he delivers with a 1000-kilowatt smile. Joe's parents have been together for 35 years and it's clear that he's having some trouble recreating that kind of love for himself.

"My dad met my mom and two months later, they were engaged," he revealed, possibly hinting at the fact that he buys into the show's warp-speed process for falling in love and getting engaged. Added Joe, "I do believe when I meet that right woman, I feel I'll know right away and I'm not scared to get married," setting himself in very clear opposition to the Peters of the world.

And if you thought he was going to mess up all this good will with an awkward limo entrance — he even kept his first impression on-brand! He totally forgot what his opening line was going to be the minute he laid eyes on Becca and then admitted as much to her. (She, very reassuringly, told him he looked handsome and that it was okay.) It could have been planned all along, but his "What the *bleep*?" to himself as he's walking away from Becca implies that it wasn't. He sheepishly confessed in a cutaway interview that she looked more stunning than he was expecting and he got caught off-guard. "I like her already," he later said. "I'd marry her. I'd marry her right now!"

As for Joe's shift from stock trader to grocery store owner, he said that he used to work in wholesale stocking watermelons (and a scroll through his Instagram indeed shows him hoisting crates of them). He now owns a small grocery store on Chicago's South Side. According to the Chicago Tribune, the grocery store where Joe shot his intro package was Eric's Food Center, which is on the South Side, so it's possible that was his real store.

Unfortunately, Becca decided to chop Joe (see what I did there?) on his very first night in the mansion. Even though the Bachelorette remarked, "Oh, cute!" when Joe revealed that he was a grocery store owner, and they share midwestern roots, she apparently didn't feel enough of a spark with him to keep him on. Of course, he has a free website full of fans ready to comfort him on Twitter. The Justice for Chicago Joe campaign has already kicked off and on a season where a couple of sh*tty dudes have already presented themselves, he might just be among the most disappointing cuts of the season.