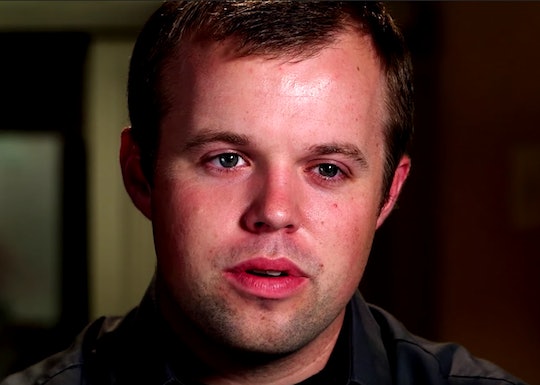 John-David Duggar Has *Officially* Entered Into A Courtship

It is so much fun for fans to keep up with the Duggar family, the stars of TLC's reality show, Counting On. Because there are 19 siblings in the family, something exciting is bound to be going on in their lives pretty much all the time. In fact, on Tuesday, the Duggar family had a very exciting announcement to make — John-David Duggar officially entered a courtship. Of course, people have to be wondering who John-David Duggar is courting, especially since so much of the Duggar's love lives are so public.

Duggar is courting Abbie Burnett, according to Us Weekly, and the couple could not be any happier about their new relationship. "Abbie and I are just so excited, we've known each other for several years," Duggar told Us Weekly. In a video posted to the Duggar family website, Duggar and Burnett let fans in on a little more about their relationship. In spite of knowing each other for a while, the couple revealed that things started getting pretty serious a couple of months ago.

"John-David flew in for a church event, here in Oklahoma where I'm from, and we really got connected then," Burnett said. "We fell in love pretty quickly and it's been a wonderful journey thus far," Duggar added.

Based on the way that Duggar and Burnett look at each other in the video, people can tell how much the couple cares for one another. But now that fans know about the courtship, they're probably dying to know a little more about Burnett.

Burnett is a 26-year-old nurse in her home state of Oklahoma, according to TLC. And because Duggar is a constable and works part-time as a police officer in Tonitown, Arkansas, according to Us Weekly, Duggar has been flying out to Oklahoma to spend time with Burnett and her family, TLC revealed. So the couple can handle a bit of distance — for now. Burnett is also reportedly a registered Republican, according to Voter Records, which makes sense considering the Duggar family has conservative beliefs and values. Like Duggar, Burnett reportedly comes from a large family and is one of eight kids, as reported by The Ashley's Reality Roundup. But, because the relationship is so new, there isn't much information about Burnett on the internet. Hopefully this will change as Burnett's relationship with Duggar progresses.

John-David brings our hearts so much joy and we've watched him faithfully pray, wait, and trust God for the right girl to come along! Now, a beautiful relationship has blossomed between the two of them. We can't wait to see what the lord will do in the future.

At 28-years-old, John-David has taken his time to enter a courtship, according to In Touch Weekly, a word that is defined by the Duggar household as "dating with the intention of marrying." During an interview with TLC in 2016, John-David revealed that he had been praying for the right person to come into his life. John-David said:

One day the lord will bring the right one along and then I'll start a family and hopefully be able to invest in their lives and raise up a generation that will be great people for this society and be able to be a good solid family that we can be.

It seems like John-David has found that in Burnett, which is terrific news. But in case fans wanted to know a little more about Burnett, they can tune in to the new season of Counting On, which premieres at the end of July, according to TLC, to learn more about Burnett, John-David, and their new relationship.