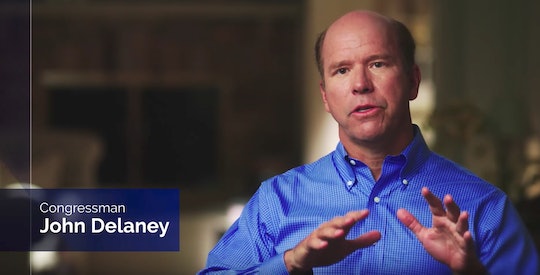 Sure, the next presidential election is a long three years away, but that doesn't mean people can't start looking forward to it, especially with so many holding less than favorable views toward the current president. Already, there's one name you'll likely start to hear a lot more often between now and then, given that the opposition rival has already filed paperwork to officially become a candidate in the 2020 race. So if you're wondering who John Delaney is, and about his back story and stances, don't worry, he's already got you covered.

This past week, with over 1,100 days until the 2020 presidential election, Delaney announced that he would seek the Democratic party's nomination in 2020 and challenge Donald Trump to become the next president of the United States of America. Delaney has experience in politics; He is a three-term Maryland congressman known to be "politically moderate with a willingness to reach across the aisle," according to U.S. News & World Report.

Like Trump, Delaney also has some money. According to that same report, Delaney, a former banking entrepreneur, is one of the wealthiest members in Congress with a net worth of $90 million.

As president, Delaney hopes to prepare the country for the future while ensuring them that the American dream is obtainable.

In a statement on his website, Delaney said of his decision to run:

The American people are far greater than the sum of our political parties. It is time for us to rise above our broken politics and renew the spirit that enabled us to achieve the seemingly impossible. This is why I am running for the Democratic nomination for President of the United States.

During his time in Congress, Delaney has voted in what he believes to be the best interests of the American people. He has consistently voted against Obamacare's repeal, supports public abortion funding, and his voting record shows he favors broad civil rights and the middle class the majority of the time.

In a Washington Post op-ed announcing his bid for candidacy, Delaney imagined a clear vision for the country's future which heavily includes technological advancement:

My focus is on preparing the country for our future. Technological innovation, automation, and globalization are powerful forces in the world today. These forces have been enormously positive; they continue to make life better, enhance productivity, solve some of the world's most difficult problems and evolve society.

Delaney also called for infrastructure investment, tax reform, and better health care and education systems in his op-ed. Still, according to CNN, Delaney winning his party's nomination is an extreme long shot.

While some have criticized Delaney for announcing his bid a little too early, Delaney views it as a strategy — the earlier he announces his bid, the more time the rest of the nation can get to know him. Delaney told The Associated Press,

I kind of view myself as sort of a long-distance swimmer, and I view this as a long race, and so, part of the challenge, obviously, in running for president, is to build the kind of name ID you need, so that you're relevant when the race really starts. It's a lot easier to build name recognition over a year and a half than it is over two months.

Fair enough — not to mention, Trump has still been holding campaign rallies of his own for the past few months, so why should his challenger be held to a different standard?

Keep an eye out for Delaney — his name and face could be one that you'll be hearing about for the next few years to come.