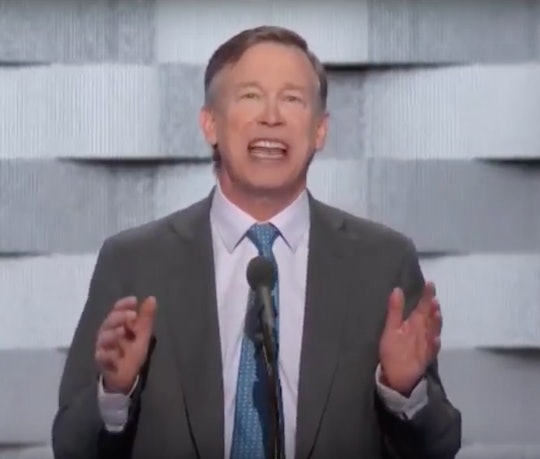 Who Is John Hickenlooper? The Colorado Governor Was Reportedly On Clinton's VP Shortlist

Just hours before Hillary Clinton was slated to formally accept her party's presidential nomination on the closing evening of the Democratic National Convention, one governor took the stage to talk about invigorating the economy and job creation. Despite the honor, though, there's one job that he didn't get: Colorado Gov. John Hickenlooper was reportedly on Clinton's VP shortlist — and it's a position he recently told a CBS affiliate in Denver that he would not have refused. Virginia Sen. Tim Kaine instead snagged that responsibility, but Hickenlooper still turned out at the DNC to support Clinton and his party — and, of course, to lambast Republican nominee Donald Trump.

“Whether it’s being downsized, laid off, or fired, it’s not funny, and it’s not a reality show punch line when it happens to you,” Hickenlooper said, referencing real estate tycoon Trump's punchline on his TV, The Apprentice, now off the air. He added that he's talked with Hillary Clinton, by contrast, about streamlining regulations, increasing access to loans, incentivizing innovation, and "how to support the transformation of new ideas into new jobs," and that's all part of the reason why he's with her.

And until about six weeks ago, the Clinton camp was vetting him to stick with her all the way to the White House as her second-in-command.

On Wednesday, Hickenlooper told the Denver CBS affiliate that having been interviewed and vetted for the veep position "one of the greatest honors of my life." But his primetime spot on the speakers' schedule Thursday evening is fueling speculation that this onetime geologist, brewpub owner, and former mayor of Denver may have an offer to serve in Clinton's potential cabinet in his future, The Denver Post reported.

According to the newspaper, the 64-year-old governor has said he wants finish out his second term, which will end in January 2019. Several top Democrats told the paper that if Clinton were to offer Hickenlooper a position in her cabinet, it would likely be as Commerce secretary. And that could be fitting: ABC reported that in 2008, Hickenlooper played a major role in marketing Denver as the site of the 2008 DNC, where President Barack Obama accepted his first nomination.

Supporting the economy is certainly one of the governor's main goals — whether he does that on a national level or a state level. In his DNC speech, he touted that Denver is the fastest-growing big city in the country, and that Colorado has the second-strongest economy in the nation. And he's now focusing the energy he put into making that a reality into supporting Clinton's campaign. "We all have a job to do: electing Hillary Clinton," he said. "So let’s go to work."