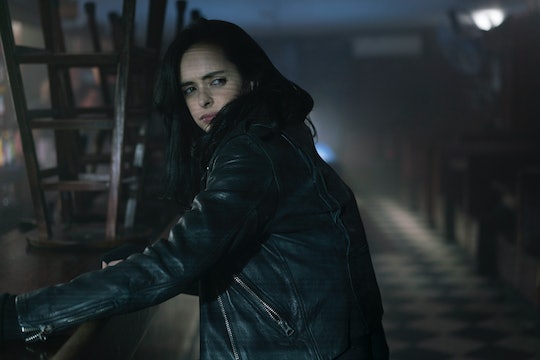 Jessica Jones Is On A Mission On 'The Defenders'

Matt Murdock, Jessica Jones, Luke Cage, and Iron Fist are all up against the same foe, but at the start of The Defenders, they don't know it yet. Instead, when the series begins they're all following their own leads. For Jessica, that means trying to track down a man named John Raymond. So who is John on The Defenders? He somehow got sucked into The Hand's schemes. (Warning: spoilers ahead for Episode 3 of The Defenders!)

At the start of the series, Jessica is approached by a woman and her daughter, asking for her help. The woman is John Raymond's wife and she believes he's missing. Jessica being Jessica isn't at all interested in their plight and tells the woman John is probably cheating on her. That would've been the end of the story, but when Jessica enters her office she gets a phone call from someone using a voice scrambler, telling her not to investigate John's disappearance. Of course, this just makes Jessica more curious and she decides to take the case.

Thanks to Malcolm's advice, Jessica is able to trace the call to a pay phone. Malcolm knows the area and directs Jessica to a sketchy building where she then finds John's hideout filled with C-4 explosives.

After calling the cops, Jessica heads home only to find John waiting there for her with a gun to Malcolm's head. That's when he begins talking about how "they" are after him, and though Jessica has no idea who he's talking about, it's obvious he means the Hand. However, he doesn't say why exactly they're coming after him. All he says is he needs to keep his family safe.

Unfortunately, that's when Elektra shows up and scares John so badly he decides it's best to just kill himself, ending any chance Jessica had at getting more answers and also saving him. Despite that, there are a few things she was able to uncover.

She later learns John worked in construction and built the Hand's office building. However, there must be more to it than that since they were going to kill him because of it. There's also still the question of what all the C-4 was for (another earthquake perhaps?). When Jessica told John about it he seemed confused. Perhaps the Hand planted the C-4 in an attempt to incriminate John, before he tried to reveal their plans to anyone. That could also explain why Elektra was sent to seemingly kill him.

Now that John is dead, his family may never get the answers they seek. Still, hopefully now that he's gone they'll be safe from The Hand.