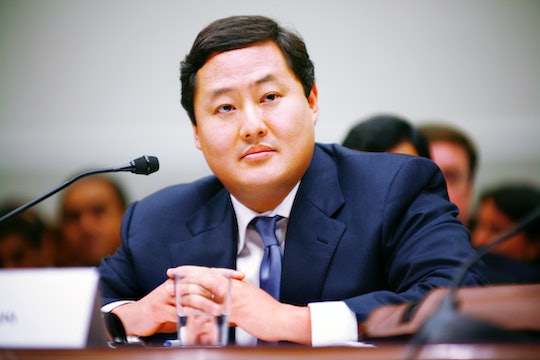 When the guy who authored the "torture memos" says you've gone too far, you've got a problem. On Monday, John Yoo wrote a searing op-ed in The New York Times accusing President Donald Trump of misusing his executive power. So who is John Yoo, exactly? He's a lawyer and professor most famously known for helping give President George W. Bush the authority to torture suspects in the wake of the 9/11 attacks.

More Like This
Prince Harry’s Famous Dad Friend Warned Him About Paparazzi In Their Neighborhood
Postpartum Sex Pain: Why It Hurts & What You Can Do
Pregnant Olympian Shawn Johnson Cried When Her Daughter Was Sad At Drop-Off
People Have Thoughts About A Mom Saying That Parents Are "The Real Teachers"

Faced with President Trump’s executive orders suspending immigration from several Muslim nations and ordering the building of a border wall, and his threats to terminate the North American Free Trade Agreement, even Alexander Hamilton, our nation’s most ardent proponent of executive power, would be worried by now.

He went on to argue that Trump did not seem to understand the "constitutional roles of the three branches" of government, or his own responsibility to “preserve, protect and defend the Constitution.”

Yoo wrote that he thought Trump's order to suspend the Trans-Pacific Partnership fell within the reach of his powers, and that even the controversial immigration ban on seven Muslim-majority countries was within the law as he saw it, despite it being "bad policy." But he had many other reservations about the way the president was wielding his authority.

Yoo took issue with the executive order's original conception as a "Muslim ban," the way in which Trump fired acting attorney general Sally Yates, and Trump's executive order about building a wall on the Mexican border, among other things. The whole op-ed was even titled "Executive Power Run Amok."

And just to reiterate, Yoo is no liberal "snowflake." This is the guy who, when he served in Bush's Justice Department, authored a series of memorandums providing legal arguments that the torture of detainees in the War on Terror was within the law, and not a war crime. According to tapes of a debate found by The Intercept, Yoo even defended the legal right of a president to torture children. As NBC News reported, he's part of the reason that the United States went to war in Afghanistan, and that Bush was able to open the ethically-dubious detention center in Guantanamo Bay. And when it came to President Barack Obama, Yoo supported his problematic use of drone strikes.

So the fact that this man has "grave concerns" about Trump is troubling.

This is not normal.