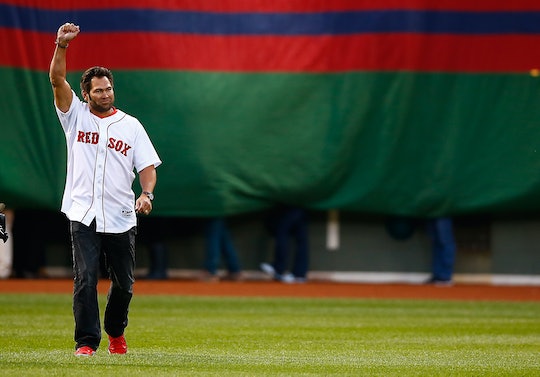 The Crew On 'Below Deck Med' Are Welcoming A Literal Legend

Below Deck Mediterranean is about the crew of a luxury charter yacht — but sometimes the guests aboard are A-list enough to warrant some attention of their own. An upcoming episode features a familiar name to some, but Bravo fans who don't follow sports may wonder who Johnny Damon is outside of his cameo. Below Deck Mediterranean is about to show you there's more to the athlete than you might think.

Damon is a retired major league baseball player who played on several different teams across the country between 1995 and 2012. That's right. For 18 seasons, the MLB player represented the Kansas City Royals, Oakland Athletics, the Boston Red Sox, the New York Yankees, the Detroit Tigers, the Tampa Bay Rays, and finally the Cleveland Indians. He didn't just play, either. Damon was part of not one, but two World Series Champion teams, the Red Sox and Yankees, and he made history with a 136-run season with the Royals when he led the American League. His professional career was a busy one, so highlighting his retired life on an episode of Below Deck Mediterranean feels right.

The father of eight (yes, eight) isn't only a famed MLB player, husband, and now reality star. As part of the 2018 all-athletes cast of Dancing with the Stars, Damon and his partner, Emma Slater, were booted on the first night after the pair's foxtrot to John Fogerty’s classic Centerfield. Dancing skills aside, Damon also spends time working with charities such as the Wounded Warrior Project, a nonprofit organization that serves veterans and service members who were injured in military service on or after September 11, 2001, and the foundation he established, The Johnny Damon Foundation, which donates funds to charitable organizations that provide funds for disadvantaged children at risk.

As for his Below Deck Mediterranean appearance, Damon boards the ship with a spritely group of buds, much to the crew's chagrin. I can't imagine a successful athlete causing a ruckus on a luxury ship at sea, but I digress. Of course, this is Below Deck so a needy guest is hardly worst of the drama.

In the same episode as Damon, Captain Sandy isn't too happy with Jack and Travis after they fail to respond to an alarm, Hannah is rapidly running out of patience with June, and Anastasia's food skills are in question just as she begins to feel comfortable in the galley, with guests sending things back as quickly as she makes them. Later in the episode, Travis and Joao have to travel into deep water to inspect the anchor chain (which is hella dangerous). It's a lot of drama, obviously, but would viewers really want it any other way?

Johnny Damon on an episode of Below Deck Mediterranean go together like peanut butter and jelly. He may be retied from the game of baseball, but his time on the high seas is only beginning, so why not capture all the opulent hijinks on camera? At the very least, it'll give commoners like myself a closer look at what being Johnny Damon for a day might feel like. And to the Ionion Princess crew who have to deal with the aforementioned hijinks while miles away from land, I salute you.