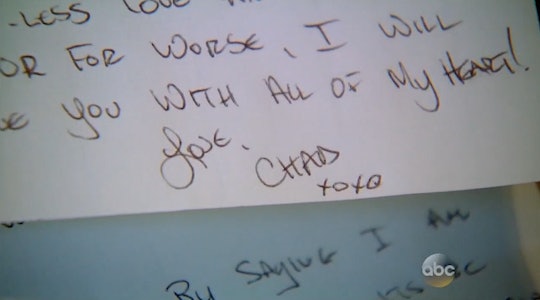 Who Is JoJo's Ex? Chad Rookstool Is A Bit Of A Mystery

This season of The Bachelor may have been dubbed as relatively drama-free compared to others (aside from Ben ditching Olivia on a deserted island), but the latest episode proved that to be false as it was chock full of tears, love confessions, and apparently ex-boyfriends. After three highly emotional hometown dates, it was time for Ben to woo JoJo's family and win over her overprotective brothers. But before introducing her loved ones to her potential future husband, JoJo was greeted with a not-so-pleasant surprise. So who is JoJo's ex, Chad Rookstool, and why did he decide to intrude on her hometown date?

Coming home to a bouquet of roses and a heartfelt letter from your estranged ex is not exactly ideal, especially when it happens moments before you're set to introduce your current boyfriend to your family. Your timing couldn't have been worse, Chad. The 24-year-old JoJo hasn't shared a ton about her previous relationship throughout the duration of the show, but after this week's crazy episode, plenty of people were wondering who the guy was.

Although we did get to hear Rookstool's love confession to JoJo during their emotional phone conversation, casting him in a rather positive light, there is clearly another side of him that we still don't know much about. I did a little digging to find out some of the most notable details you need to know about the mysterious ex.

A quick scan of Chad's Instagram reveals he is the owner of a hair salon in Dallas, which is evident through his countless salon chair selfies and pretty hairstyle photos.

This one is obvious. Not only did he send JoJo a letter saying he wants her back, he also still has photos of the two of them together on his social media. Sure, the photos were probably during the time the couple was dating, but being totally over someone means deleting all signs of their existence from your Instagram, right?

3. He Is Much Older Than JoJo

According to RealityTVWorld.com, Rookstool is 38 years old, which is 14 years older than JoJo. That's quite a large age gap. Perhaps that was partially the reason for their breakup?

4. He Is Still On Good Terms With His Ex

Chad and JoJo are supposedly on pretty good terms, or at least they were before this episode. According to Heavy.com, Rookstool has reportedly agreed to watch JoJo's dog while she was away filming The Bachelor. I'd say that's a little more than just "on good terms."

It's safe to say at this point that JoJo isn't really interested in rekindling a romance with her ex. But at least Chad can say he gave it the old college try.