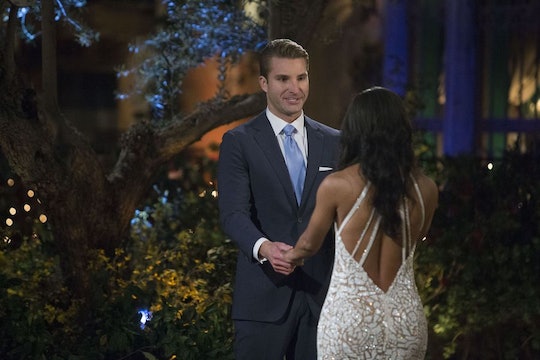 Meet Jonathan On 'The Bachelorette'

Hold onto your wine glasses, Bachelorette fans, because Rachel's season is finally here. This week, Chris Harrison finally made the cast announcements, live on Facebook and there is quite the group of men this year. Although Harrison repeated over and over again that there were many "accomplished" men vying for Rachel's heart, one dude caught my eye. His name is Jonathan, The Bachelorette "tickle monster." Yes, really, that is his described occupation. Harrison assured viewers that the 31-year-old is actually a doctor and that they were just having fun with the "labels" they give the cast.

Harrison said that "tickling" is "what he does, that's his thing." Whatever that means. "We figure when we have fun with these labels, it's not what they are, it's kind of who they are," Harrison added. "When you wake up Tuesday morning after the initial episode you're not going to say, 'who's that doctor?' You're going to say "tickle monster" and all of your friends will know who you mean."

Oh man, this is going to get super weird, right? Harrison assures fans that it won't be. He told Bachelor Nation that he understands that it may sound creepy upon first hearing about it. However, he swears, "It's not really that, it's affectionate, it's endearing." We'll see about that.

Jonathan also says that he's "driven, funny, and easy to get along with." He's also not a party guy. According to his official bio, the Tickle Monster is a "wingman historically," but has been trying to be "more outgoing with meeting new people and being more of the instigator." Let's all cross our fingers that he doesn't do that by tickling people. Something tells me we're definitely going to see him tickle Rachel as soon as he steps out of the limo, right?

Who knows, maybe Rachel will be into the doctor. He's been married before and promises that when it comes to intimacy he's "pretty open to most things" and "usually last[s] a long time (in a good way.)"

It's pretty clear that there are going to be a lot of mixed feelings about Jonathan. A guy who tickles and makes promises about his sexual "performance" is an acquired taste. And there are some other pretty good contestants this season to compete with. There are other doctors, lawyers, and even some "older" guys (as Harrison says, 37 is "ancient" in Bachelor Nation) vying for Rachel's heart.

We'll just have to wait and see if tickling is the way into it.