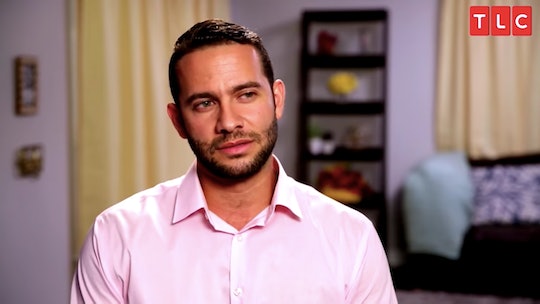 Fernanda Will Be Meeting Jonathan's Mom On '90 Day Fiance'

Much has been made of Jonathan Rivera's bachelor lifestyle on 90 Day Fiancé, especially since it came to an abrupt end as soon as he saw 19-year-old Fernanda Flores in a Mexico nightclub. They got engaged after three months, but living in different countries meant they'd been apart for much of their relationship. Fernanda is only meeting Jonathan's mom now, which was captured for an upcoming episode. So who is Jonathan's mom on 90 Day Fiancé?

Getting the 411 on Mrs. Rivera will have to wait until Episode 8 of Season 6, "Flirting With Disaster." According to TV Guide's summary of the episode, Fernanda will be introduced to Jonathan's "skeptical" mother, but the blurb doesn't offer any other details. And Mrs. Rivera has no social media presence to speak of, because before her son joined a TLC show, she was likely living a civilian life far away from any TV cameras. Both Jonathan and Fernanda have made their Instagram accounts private, so there's no snooping to be done their either. Jonathan's mom remains a major mystery without social media to provide any information about her personality, or even her first name.

But despite that, she seems to have been the one who spilled the beans about the status of Jonathan and Fernanda's relationship post-show. That being said, it's important to remember (as always) that until there is confirmation from Jonathan or Fernanda themselves — all of this is speculation.

According to Reality Blurb, a Reddit user who claimed to be a former classmate of Jonathan's posted screencaps from a Facebook post made by Mrs. Rivera. If this post still exists, it must be very well-buried, leading me to assume it has since been taken down. The post was about Jonathan and Fernanda's courthouse wedding, with enough pictures to give it a little more validity but — it must be stressed — no official confirmation from the couple themselves.

In the post, Jonathan's mom allegedly wrote that the couple had decided to get married a few weeks ago. "May God bless you two, guide you through your marriage with love, patience, compassion, and honor for one another," it read. "Can't wait for next year for the wedding fiesta celebration in Mexico! Congratulations!! I love you both!" A string of jubilant emojis followed.

If the sentiment and photos were really shared by Jonathan's mom, then it makes total sense why it was taken down. Not only would it be a big spoiler to reveal that Jonathan and Fernanda went through with the wedding, it also undercuts the tension of Mrs. Rivera's supposed skepticism for her to be totally on board with the relationship. Maybe fans will see her warm to Fernanda over the course of the season, but jumping to the denouement on social media does kind of take the wind out of that storyline's sails.

Some fans suspected that Fernanda and Jonathan had walked down the aisle even before that, because social media indicated that she was still living in the States after her K-1 visa had expired. But now that their Instagram accounts are private (and their Twitter accounts not very forthcoming), one will simply have to take any Reddit posts with a grain of salt. The truth is sure to come out this season one way or another.