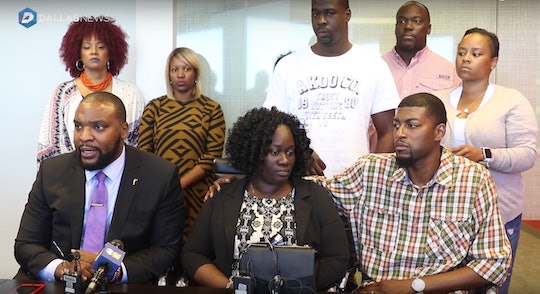 Police involved in a shooting in a suburb of Dallas, Texas, over the weekend have reportedly changed their story after an unarmed 15-year-old was killed. No one else involved was injured — including several police officers who reportedly shot at the car the teen was in. Who is Jordan Edwards? The family of the teen shot by police in Texas is speaking out.

On Saturday night, a 15-year-old named Jordan Edwards went to a party in Balch Springs, Texas — a suburb of Dallas, according to the New York Times. Edwards was a freshman at Mesquite High School, where he played football and was a good student, according to an official statement released by the school in the wake of his death. When the party started to feel like it was getting out of hand, Edwards decided to leave, according to the Dallas Morning News.

What happened next has become the subject of debate, as initial statements from police officers involved contradicted body-cam video evidence, according to The Washington Post. The officers originally stated that the car Edwards was in approached their cruiser aggressively, which they responded to by firing a rifle into the cab of the vehicle. After reviewing video, however, it became apparent that the car was, in fact, driving away from the police cruiser when the officer fired. Edwards was shot in the head, through the passenger side window, and died of his wounds a short time later. None of the teens in the car — including Edwards —were drunk or in possession of a weapon, according to NPR.

The police department has since corrected its original statement and launched an investigation, saying that the shooting "did not meet our core values," according to the Dallas Morning News.

In a press conference with the Dallas Morning News, the lawyer representing Edwards' family joined them to speak out about what happened to their son, and to plead for transparency and accountability from the police department as they pursue justice for their son. "We are declaring war on bad policing," said the family's attorney, Lee Merritt "This has happened far too often. We are tired of making the same rhetorical demands, of having the same hashtags."

Data collected and presented by The Guardian showed that Black Americans are twice as likely to be shot by police than those who are white. Between 2010 and 2012, ProPublica presented data that found Black teens were 21 more times as likely to be shot by police than their white peers. Other research has postulated that these rates may be influenced by the areas' local police departments are patrolling — namely, areas of high crime that may be disproportionately poor and populated by minorities, as one study pointed out.

While statistics can't be ignored, the names Freddie Gray, Michael Brown, and now Jordan Edwards evoke the real-life consequences of alleged profiling by law enforcement. As Black Lives Matter and other movements continue to fight for justice, Merritt's words as he spoke of Jordan Edwards continue to echo: how many hashtags will it take before justice is served?