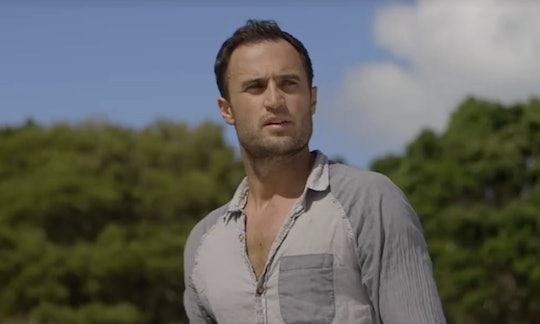 Jordan Could Become The "Villain" On 'The Bachelor Winter Games'

Jordan was the star of Season 2 of The Bachelor NZ back in 2016. At the time, he was a 32-year-old film producer and actor; Jordan's claim to fame at the time was that he worked with Margot Robbie, but he said he "wouldn't be playing a role" while he was on The Bachelor. Well, Jordan seemed to take that all back later on. Only several days after the finale of his season aired, Jordan broke up with the Bachelor New Zealand winner, Fluer Verhoeven. Not only that, but he said the entire show wasn't real.

Now, I'm not under the illusion that any of the Bachelor shows are observational documentaries, but I'd be hard-pressed to find an American lead who said they didn't have feelings for contestants in the moment. The producers, from my observations, are pretty good at stirring up emotions and making contestants and Bachelor/ettes alike believe they're in love. Are they really? Well, some Bachelor couples have survived the test of time... but even the ones that break up don't come out and say the entire show was fake.

Jordan stated that producers apparently knew he didn't have strong feelings for the winner, but they ordered him to keep quiet about it. In an interview with New Zealand outlet Stuff he said, "It was not a surprise to the network, the production or the girl what was happening. But they made it out to be." He called the show a "trainwreck" and an "inside job" to screw him over.

What did his leading lady, Fluer, have to say about this? In her own interview with Stuff, Fluer lashed out against Jordan and called him cowardly and fame hungry. In the end, she just wanted him to be real with her and the other contestants. "The only thing that annoys me is that he was never completely honest with me," she said. "I would have respected him much more if he'd said, 'hey listen I don't have any feelings for you, I was just doing this for the show.'" According to Fluer, she truly had feelings and the fact that he led her on was disrespectful. She continued, "I always had his back and for him to continuously humiliate not just me but all the girls, that was the moment I just went enough is enough."

Fluer wasn't the only one upset about this. After his swift breakup with Fluer was announced, Jordan received death threats and online abuse. No one deserves that, but it shows just how despised he was after the show. Will Jordan be redeemed on The Bachelor Winter Games? Will he go in trying to be famous, trying to win, or trying to find love? (I'm going to guess: a combination of the first two). Regardless, it will be interesting to see how the other contestants react to his Bachelor history, and how they treat him as a player.