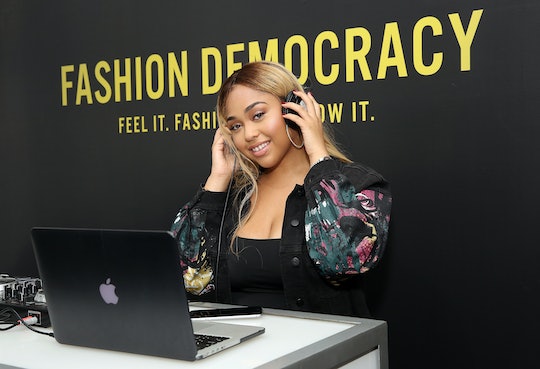 Even reality stars have besties. Kylie Jenner's longtime BFF has made multiple appearances on both Keeping Up With The Kardashians, is a co-star on Life of Kylie, and is often featured on Jenner's Instagram page. But just who is Jordyn Woods? She has proven herself to be a true pal to Jenner and a successful woman all on her own.

At a World Smile Day celebration that benefitted Smile Train, a children's charity for kids with cleft lips and palets, Woods discussed her friendship with Jenner. She shared how close the two of them are and what their relationship means to her, according to People:

Having a best friend is, like, everything. I feel like everyone deserves a best friend. It’s just like having someone you can call at any time. Obviously, I have my family and I have my mom, but sometimes you need that extra person that isn’t a part of everything, going through the same things as you. It’s really helpful. I feel like right now, at this age, you develop the friends that you’re going to have forever, and we do everything together.

A reporter also asked Woods about Jenner's pregnancy at the Smile Day event, but she wouldn't give anything away. When asked if she thought she would be a god mom to Jenner's child, Woods responded, according to People:

A god mom? In the future, whenever that is, who knows? I’ll have probably have a lot of godchildren from all my friends, because we’re all just like a family.

A representative for Jenner has not responded to Romper's request regarding whether the pregnancy rumors are true.

She also said she has yet to receive any formal requests to be a godmother. Woods also declined to comment about what kind of parent Jenner might be to any future children. She has clearly decided to stick to girl code and isn't going to spill on her BFF's personal business. Aside from her affiliation with the Kardashian-Jenner family, there's quite a bit to learn about Woods.

Woods is a successful professional model and she told New York Magazine that her agent found her on Instagram. Since then, Woods has also spoken at length about her decision to enter the modeling world. She told Teen Vogue that it is her way of promoting body positivity among young women:

I’ve always known that my purpose is to help as many people as possible, and with modeling I feel like it’s an awesome way to show girls you don’t have to look any particular way. You just have to be confident and own exactly who you are because one of the greatest things we’re given is our individuality — not one person is exactly you. I want to show everyone that you can do what you want, don’t be afraid to try new things.

As a model, Woods has been labeled plus-size, a title that can be frustrating for people who are part of the body-positivity movement (because of what seems to be a reluctance to use or fear of the word "fat"). Woods, however, told Teen Vogue thats she sees it as a positive thing:

For me, it’s awesome because I’m just naturally a super curvy girl and I feel like my body will never be size 0. There’s so many people out there just like me, and right now the curve industry is just blowing up because people are realizing curve models are cool, and most people are not that skinny. I just want to make a change in the curve industry because I want other curve girls to realize that you don’t have to dress a certain way because you are curvy. There’s not a lot of clothes out there for girls that are bigger, there’s not a lot of trendy things out there, and I want to change the way people look at the plus size industry.

Much like Jenner and her sisters, Woods's career is guided by her "momager" Elizabeth Woods. Elizabeth is a a talent manager, brand manager, and photographer who works for Mixed Image Media and Woods Marketing Group, according to Heavy. The two are also seriously cute and seem to have a very close relationship. Woods posted the photo below on Instagram, captioning it that her mom is her #WomanCrushWednesday.

The Kardashian-Jenners aren't the only famous fam that the model is close with. Jaden Smith and Woods have been friends since Smith was just a few days old, according to Heavy. She even reportedly calls Will Smith her "uncle." OK, I'm officially jealous.

Overall, Woods is an interesting young woman who keeps some famous company and spreads an important message of self-acceptance to her contemporaries. Even if Jenner has yet to officially ask her to stand in as godmother, she would make a great choice for one. Talk about #SquadGoals.