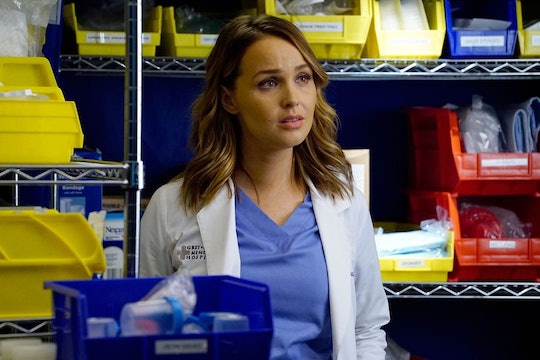 Who Is Jo's Husband On 'Grey's Anatomy'? He May Appear Soon

Grey's Anatomy fans watched Alex propose to Jo three times only to see him get turned down for every single one, which was heartbreaking to watch. But it turned out Jo actually had a reason for continuously rejecting Alex. You see, she apparently was already married to someone, but who is Jo's husband on Grey's Anatomy and why has she kept it a secret for all of this time? Unfortunately, Jo's husband was abusive and she's been on the run from him for a while now.

After Jo turned down Alex for the third time in the Season 12 finale, she decided to drown her feelings in alcohol and ended up confessing to DeLuca that she already had a husband she was hiding from and that's why she couldn't marry Alex. All we know about Jo's mysterious husband so far is that he's dangerous and manipulative. Apparently he's charismatic and charming, so everyone else loved him, but behind closed doors he would hurt Jo. The reason she never filed for divorce was because she ran away from him and she feared if she tried to get a divorce he would find her again and hurt not only her, but Alex as well. In a way, this was Jo's attempt to actually protect Alex from danger, but of course he had no way of knowing that.

Because Jo was so intoxicated at the time of telling her story, DeLuca tried to do the nice guy thing of getting her home and into bed in once piece. However, she soon started to undress in front of DeLuca and Alex ended up walking in on a scene that looked worse than it really was. Not giving either Jo or DeLuca a chance to explain, Alex beat up DeLuca, which is why he's now on trial and could very possibly end up in jail. In the preview for the winter finale, it appears Jo finally confesses to Alex that she's actually married and many fans are wondering if they'll finally get to see Jo's secret husband, though, for Jo's sake I hope not.

When Camilla Luddington, who plays Jo, was interviewed by The Hollywood Reporter after the end of Season 12, she said there weren't any conversations about casting Jo's husband. However, a lot of time has passed since then so it's possible he may make an appearance soon or at the very least fans may learn more information about him. As it stands right now fans don't even know his name. Whether Jo's husband is revealed or not this week, the winter finale is guaranteed to be jaw-dropping as Alex's trial looms on the horizon. Could Alex really be headed for prison? Will Jo be getting a surprise visitor any day now? Fans will just have to wait and see.