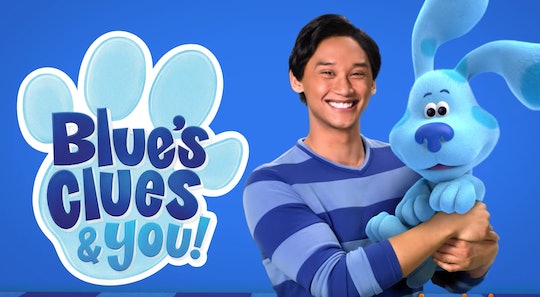 Who Is Josh Dela Cruz? The New 'Blue's Clues' Star Has Twitter Thirsty

Earlier this year, it was announced that a beloved Nick Jr. show would be getting a re-boot: Blue's Clues. Yep. Blue, Magenta, Mr. Salt, Mrs. Pepper, and the whole gang are returning for a fresh take on the wildly popular preschool series. And along with updated graphics and music, will be a brand new star. So who is Josh Dela Cruz? The new Blue's Clues star has Twitter obsessed.

If you haven't heard that Blue's Clues is getting a reboot, then allow me to introduce you to Joshua Dela Cruz. He's a 30-year-old former Broadway actor who played Iago in Aladdin — and briefly Aladdin himself, as well. He was also on ABC's Time After Time and CBS' Bull, according to Playbill. However, Dela Cruz's new gig with Nickelodeon marks his television debut as a show regular. Pretty cool, huh?

Oh, and did I mention he's also insanely attractive. No, like really, really attractive. Although Dela Cruz was initially announced as the star of Blue's Clues & You back in May, it seems like it was only recently that people realized what a thirst trap he actually is. All you have to do is take a quick look at his Instagram photos.

One Twitter user couldn't believe their eyes when they saw what Dela Cruz looks like not wearing a rugby shirt. They tweeted, "WAIIIT?? Is this really the blues clues GUY WTF."

Another person tweeted, "exCUSE ME," alongside the same shirtless photo of Dela Cruz.

Yet another person wrote, "You can blues my clues josh dela cruz."

Meanwhile, another Twitter user wrote, "Y'ALL ARE REALLY LUSTING OVER THE NEW BLUE'S CLUES HOST. I REALLY HATE Y'ALL. AND YES I HATE MYSELF TOO."

In case you were wondering, Dela Cruz is totally flattered by the fact that everyone is lusting over him.

“I never, ever thought that I would trend on Twitter in any capacity,” he told BuzzFeed. “So thank you to everyone who’s keeping this story alive, and in my old age I’ll look back at the fond day that I was trending as a thirst trap on Twitter.” LOL. (But seriously, look at those arms.)

Okay, so we've established that he's ripped and a total hottie. But guess what? Blue isn't the only puppy in his life. Because also a dog lover IRL!

And now for the sad news: Sorry ladies and gents — it looks like Dela Cruz is a married man. The Blue's Clues star has been married to his wife, Amanda, for three years, according to People.

If you're skeptical about Steve and Joe's new replacement, fear not. Just check out this clip from the first episode of Blue's Clues & Me. Dela Cruz was born to play this role.

Original Blue's Clues host Steve Burns even gives his stamp of approval — mostly because he was actually part of the casting process. Burns told People:

I had the great honor of being part of the search for the new host, and I give Josh two thumbs up! He can definitely fill my shoes, and the rugby shirt.

I mean, if Steve approves, then so do I!