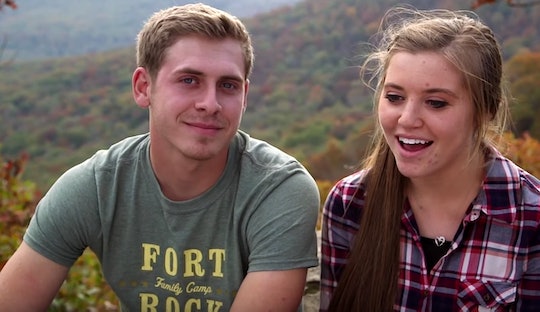 Joy-Anna Duggar Is Engaged To Her Long-Time Friend

The always-growing Duggar family will have one more son to add into the mix of 19 kids (and counting) — a son-in-law, that is. As their children continue to get older, Jim Bob and Michelle Duggar are constantly expanding their family with new grandchildren and in-laws — and now, their 19-year-old daughter, Joy-Anna Duggar is engaged. So who is Joy-Anna Duggar's fiancé? After entering in a three-month-long courtship, Joy-Anna and her fiancé, 23-year-old Austin Forsyth, are going to be married. So exciting!

On Friday afternoon, Joy-Anna confirmed the very happy news to Us Weekly, telling the magazine, "I'm so excited to be engaged to my best friend — Austin made it so romantic, it's amazing." According to InTouch, Forsyth proposed to Joy-Anna on a horseback riding outing with her younger sisters. But who exactly, is this best friend of Joy-Anna's? Those who watch Counting On on TLC — which documents the lives of the older Duggar girls — will be familiar with Forsyth, which features Forsyth's and Joy-Anna's courtship quite frequently. This engagement doesn't come as much of a surprise for viewers or those familiar with the Duggars — Joy-Anna and Austin first began their courtship last November, according to a video posted to TLC's Youtube channel, after knowing each other for almost 15 years. But those who are a little in the dark might not be as familiar with Forsyth — which is completely understandable.

Forsyth has a lot of history with the Duggars. In addition to being friends with Joy-Anna for almost 15 years, according to People, Forsyth is also close friends with Joy-Anna's older brother John-David. According to People, the friendship between Forsyth and the Duggar family began when Forsyth's family began attending the Duggar's church. This is important to Joy-Anna. "It's special that I got to grow up with him and my family knows him really well," Joy-Anna told People.

What is clear about Forsyth is that you can tell he really loves Joy-Anna. Just by looking through the few photos on his Instagram account, you can sense from the way he looks at her that there really is something special between the couple. And right now, both Joy-Anna and Forsyth are just excited for the next step. "I am looking forward to doing our wedding planning together and getting to know him better," Joy-Anna said in a video on TLC's website, announcing the couple's engagement.

Congratulations to the newly engaged and very happy couple!