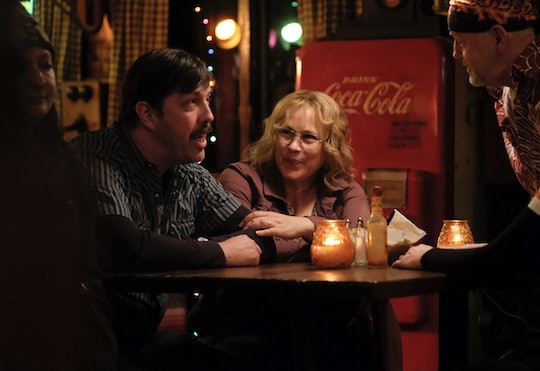 Showtime’s new drama, Escape at Dannemora, is based on the true-crime story of Joyce “Tillie” Mitchell and the part she played in David Sweat and Richard Matt’s escape from prison. Fans of the series have been diving into Mitchell’s story and background to get a better understanding of her motivations in the crime. After hearing about her past relationships and affairs, many are wondering, who is Joyce Mitchell’s first husband?

Mitchell’s first husband is Tobey Premo, a 51-year-old farmer from Massena, New York. In an interview with NY Daily News, Premo revealed that he and Mitchell were highschool sweethearts from St. Regis Falls, New York and that the two were married for five years until she left him for another man. "I kissed her on the bus and liked her ever since," said Premo. "That's why when she left me I was devastated, because it's like your first. She left me for another guy."

Mitchell and Premo had a son, also named Tobey, who was later adopted by her current husband, Lyle Mitchell. Premo told NY Daily News that his life with Mitchell was great, until he found out about her infidelity. "I loved her, she was my wife, and then all of a sudden she cheated," he said. "She screwed up everything. We had a son. We had a nice house and everything." He added that he hasn’t seen Mitchell or his son for the past 13 years.

When talking to Syracuse, Premo said that their marriage ended when he learned that she had two affairs — one with Lyle Mitchell, and another with a colleague from work. "Sure she cheated on me," Premo told the outlet. “It wasn't just with Lyle, her husband now, but with another guy she worked with. I found out because his girlfriend came to me and told me about it." Premo also noted that he wasn’t surprised that Mitchell was involved with the inmates’ escape.

While Escape at Dannemora doesn’t dive deep into Mitchell’s relationship with Premo, it does follow her connection to David Sweat and Richard Matt’s 2015 escape from the Clinton Correctional Facility (nicknamed “Dannemora” for the town it’s in). Mitchell worked as an employee in the prison’s tailor shop, where she met the convicted murderers. After admittedly having an intimate relationship with the inmates, Mitchell confessed to sneaking them the contraband that they used to escape, and revealed that she offered to drive the getaway car.

But when Sweat and Matt made their way out of the prison, Mitchell got cold feet, and never showed up to drive them away. What ensued was an intense manhunt in upstate New York, with local and federal law enforcement agencies all working together to find the fugitives. Three weeks later, Matt was found and killed by armed U.S. Border Patrol agents and Sweat was shot and captured just two days later.

Directed by Ben Stiller and filmed on location in Dannemora, New York, Escape at Dannemora features some actual footage from the prison complex that Sweat and Matt escaped from. The series also boasts a noteworthy cast, including award-winning actors Patricia Arquette and Benicio del Toro as Joyce "Tilly" Mitchell and Richard Matt, Paul Dano as David Sweat, and Narcos actor Eric Lange as Mitchell’s husband, Lyle.

Mitchell’s story is fascinating, and it makes you think about the what drives people to do the things they do, including hurting the ones they love. It’s no wonder that some true-crime stories end up becoming the most gripping series on TV.

Escape at Dannemora is currently streaming on Showtime, with new episodes premiering on Sundays at 10 p.m. ET.