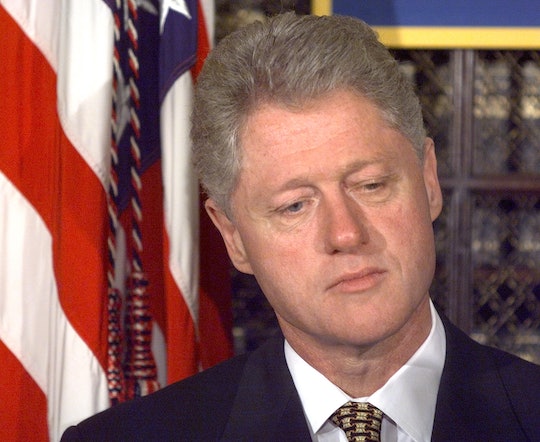 Who Is Juanita Broaddrick? Her Decades-Old Allegation Could Hurt Hillary Clinton's Campaign

A decades-old allegation that could change the course of the Democratic presidential race has reared its head once again. Not everyone remembers who Juanita Broaddrick is or can recall her relationship to former President Bill Clinton. But on Wednesday, the a 73-year-old retired nursing administrator dropped a bombshell on Twitter that brought the details of her alleged relationship with the former president back into sharp focus.

“I was 35 years old when Bill Clinton, Arkansas Attorney General raped me,” Broaddrick claimed in a tweet on Wednesday. “Hillary tried to silence me. I am now 73... it never goes away.”

For those who may not remember much about the scandals of the '90s and the Clinton impeachment proceedings, a bit of history: In 1994, following charges ranging from land fraud to sexual harassment, independent prosecutor Kenneth Starr investigated President Bill Clinton, producing a 445-page report — known as the Starr Report — that was delivered to Congress in 1998. In it were affidavits from several unidentified women who claimed to have had wanted (and unwanted) sexual contact with the former President.

Of course, once Broaddrick went public with the allegations in 1999, she became a coveted target for every media outlet in the world. Broaddrick finally told her story to NBC’s Lisa Myers in mid-January 1999. But the network put a hold on airing the story for another month, finally allowing it to run in the same time slot as that year’s Grammy Awards — well after the Clinton impeachment hearings were over, according to the Journal.

What Broaddrick had to say was certainly explosive. In 2012, right-wing website Media Research Center posted the Juanita Broaddrick NBC interview online in its entirety, giving those who had missed the segment the first time around the chance to see it. In the video, Broaddrick alleged that Clinton, then Arkansas’s Attorney General, had been in her hotel room in 1978 to discuss a business matter when he put his arm around her and began kissing her. She continued,

I first pushed him away and just told him ‘No, please don’t do that,’ and I forget, it’s been 21 years, Lisa, and I forget exactly what he was saying. It seems like he was making statements that would relate to ‘Did you not know why I was coming up here?’ and I told him at the time, I said, ‘I’m married, and I have other things going on in my life, and this is something that I’m not interested in.’

Myers then asked whether Broaddrick had perhaps "given him any reason to believe [she] might be receptive", to which Broaddrick replied, "No. None. None whatsoever."

The harrowing scene continued, Broaddrick claimed, with Clinton allegedly holding her down and forcing himself on her:

Then he tries to kiss me again. And the second time he tries to kiss me he starts biting my lip. Just a minute... He starts to, um, bite on my top lip and I tried to pull away from him. And then he forces me down on the bed. And I just was very frightened, and I tried to get away from him and I told him ‘No,’ that I didn’t want this to happen but he wouldn’t listen to me.

NBC reported in the video that President Clinton and his attorneys had declined to participate in the interview, instead issuing a statement to the network calling the allegations “absolutely false.”

Speaking to The Hill on Wednesday, Broaddrick cited the current White House race as a major reason for her choice to come forward again. “I’ve been quiet for too long,” Broaddrick said. “Now with the possibility of [Hillary Clinton] being the Democratic nominee and possibly president, I feel the need to get involved.”

Broaddrick described herself as a Trump supporter, and applauded the GOP candidate’s recent attempts to bring Clinton’s marital infidelities and allegations of sexual assault back into the public discourse, The Hill reported: “I’m glad someone did. Everyone has been hanging back and most of the mainstream media won’t approach it but it’s something that should be talked about.”

Trump first began resurrecting allegations against Clinton as part of his effort to paint the both Clinton and wife Hillary as hypocritical in calling out his own chauvinistic statements against women. In the uproar that ensued after Trump said that the former Secretary of State had been “schlonged” by Barack Obama in the 2008 presidential race, Trump chose to defend himself by calling out Clinton’s sexual history.

Of course, the idea that Trump — or anyone, really — would press Hillary Clinton to answer for her husband’s extramarital indiscretions is bizarre, at best. But the allegations made by Broaddrick are far more serious. Instead of blaming Hillary for turning a blind eye to her husband’s alleged behavior, Broaddrick claimed that Hillary herself was almost an accessory to Broaddrick's assault by pressuring the former nursing administrator to keep quiet.

Clinton herself has made women’s issues a focus of her presidential campaign, speaking out on everything from wage disparities to reproductive health. In November, the Democratic frontrunner tweeted her support to women brave enough to come forward and seek justice following a sexual assault. “Every survivor of sexual assault deserves to be heard, believed, and supported,” Hillary tweeted.

So far, Hillary's campaign has largely ignored the latest barrage of attacks by Trump. As of Thursday, neither the candidate nor the campaign had made a public response to the renewed allegations by Broaddrick. For now, everything is a waiting game.