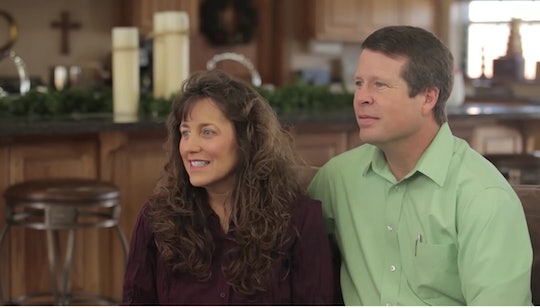 Jim Bob and Michelle Duggar launched their exceptionally large family into the spotlight more than a decade ago with their TLC mini-series, 14 Children and Pregnant Again! As their family added more kids into the mix, so did the name of the show — all the way up to 19 Kids & Counting. What many people might not know, however, is that number might have gone even higher because Michelle was pregnant with baby number 20 back in 2011, a girl they named Jubilee Duggar. Tragically, though, Michelle's pregnancy with Jubilee ended just before the halfway point. And now, six years later, Jim Bob and Michelle are remembering their 20th child who was miscarried in a touching Facebook post.

In Touch Weekly reported the Duggar Family Official Facebook page paid tribute to Jubilee today, on what would have been her sixth birthday. The social media post included a photo of a gravestone, which features the infant's tiny hand resting on an adult's finger. The following Bible verse is also engraved on the stone: "There is no hand too small that it cannot leave an imprint on this world." The Facebook post itself reads: "It’s hard to believe Jubilee would have been 6 years old today. Jubilee is our 20th child who was stillborn. We so look forward to seeing Jubilee in heaven."

In the Bible, King David’s baby died and he stated, "I shall go to him, but he shall not return to me." This is our hope of eternal life, if each one of us repents of our sins and put our faith and trust in Jesus.

People reported that Michelle, then 45, was pregnant with her 20th child when she went in for a routine prenatal checkup on Dec. 8, 2011. When the doctor was unable to find a heartbeat, according to People, she revealed to the expectant parents that the baby had died. Michelle had reportedly been in her second trimester of pregnancy — at roughly week 16 or 17 — when they learned of the devastating news.

“I feel like my heart broke telling my children,” Michelle told People. “They have all been so excited about this baby and looking forward to April coming around and having a new little one in our arms. That was the most difficult. The Lord is the giver of life and he can choose when that life is ready to go on and be with Him.”

Us Weekly reported that Michelle miscarried the baby on Dec. 11, and that she and Jim Bob named her Jubilee Shalom Duggar — which means "joyful celebration of peace," according to the Duggar Family blog. With the help of the nonprofit organization, Now I Lay Me Down To Sleep, the family was able to have professional photos taken of Jubilee. On Dec. 14, the Duggars held a memorial service with hundreds of family members and friends to mourn and honor the baby they lost. A recording of Michelle reading a letter she wrote to her 20th child was also played at this large gathering. (You can listen to it here, at the Duggar Family blog.)

This was actually Michelle and Jim Bob's second pregnancy loss, as Michelle's second pregnancy ended in miscarriage, too. At the time, she had been taking a birth control pill — and it's one of the reasons the couple had decided to leave the size of their family "up to God," according to People. Another pregnancy-related trauma the Duggars have experienced was the birth of their 19th child, Josie, according to ABC News. On Dec. 10, 2009, little Josie was delivered via emergency C-section at just 25 weeks gestation because Michelle was suffering from a life-threatening pregnancy condition called preeclampsia. The fragile newborn weighed only 1 pound, 6 ounces.

I remember reading the news of Michelle's miscarriage when it happened. Although, yes, the family already had 19 living children, I was still heartbroken right along with them. Because pregnancy loss can be such an isolating experience, no matter how far along a woman happens to be — or how many children a family already has. My thoughts are with the Duggars today as they remember the child that lives on in their hearts.