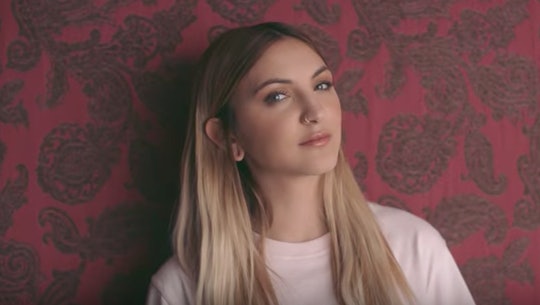 Meet Julia Michaels, The VMAs Performer Who Has Written For J. Biebs

On Sunday, a bunch of new artists will perform their music at the Video Music Awards. One of those new artists is Julia Michaels, a 23-year-old singer who just released her first EP in July. If you haven't heard of Michaels before now, that's OK —many music aficionados are also wondering, who Julia Michaels is. Although some people might not be familiar with Michaels' name, it turns out she has been in the music business for a long time. In fact, Michaels has co-written songs for a many popular celebrities, including Selena Gomez and Justin Bieber, to name a few.

It's not uncommon for singers to start off as songwriters, and Michaels is no exception to this phenomenon. When Michaels was just a teenager living outside of Los Angeles, she started writing songs with Justin Tranter, a well-established song writer and member of the band Semi Precious Weapons. Tranter and Michaels have co-written many songs together, including Bieber's hit "Sorry," Selena Gomez's "Bad Liar," and Gwen Stefani's breakup anthem, "I Used To Love You."

If you're wondering how Michaels rose to songwriting fame at such a young age, she said, according to Genius:

I started fiddling around the piano and putting my poetry to music. That’s how the songwriting got started.

After years spent writing for famous people (what a cool job, by the way) Michaels reluctantly decided to release her own music. The decision was reportedly hard for Michaels initially because she was never one to seek out attention. Michaels said, according to People:

I’ve never really been a confident person — I’m super fidgety, I bite my nails, and I’m not good at being center of attention — so it was actually a really big transition for me.

Luckily for Michaels' fans, she was eventually able to overcome her anxiety and insecurities. In January, Michaels released her first solo single, "Issues," and in June she debuted her second single, "Uh Huh." Following the success of the two singles, Michaels treated fans to her first solo effort, Nervous System, in July.

Now that Michaels has settled into her new role as a performer, she's celebrating the beauty and power of her own voice. Michaels said, according to People:

My favorite part about being an artist is that I get to have a voice. I’ve never really felt like I have had one of those before: It’s pretty cool.

Even if Michaels' music isn't your speed, her success should still be celebrated. Michaels worked really hard for her spot at the VMAs, and her story is a great motivator for young female artists.