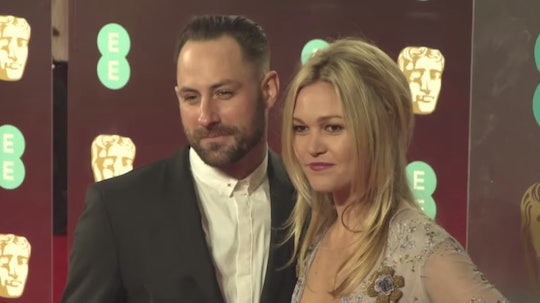 Joining fellow expecting celebrities like Beyoncé and Lauren Conrad on the baby news circuit, Julia Stiles is also reportedly pregnant and expecting her first child with her husband-to-be. This news is especially exciting for fans who know the 36-year-old actress — who showed off her growing bump on Monday while wearing a fitted black dress — from hits like Save The Last Dance, 10 Things I Hate About You, and a recent credit in The Mindy Project. But some might wondering who Stiles’ fiancé, Preston J. Cook is and how the soon-to-be parents met.

While his name might not be recognizable like Stiles' — who is expected to give birth later this year, according to People — Cook also has an impressive career in the entertainment industry. Cook is known for his behind-the-scenes work in the camera department on several film sets. He reportedly met Stiles on the job while on the set of the 2015 film Go With Me, which Stiles starred in, according to People.

In addition to his work on that film, he’s also worked as a camera assistant on Leonardo DiCaprio’s drama film The Revenant, the romantic teen flick If I Stay, as well the upcoming romantic comedy Overboard, a remake 1987 comedy that originally starred Kurt Russell and Goldie Hawn.

As Us Weekly reported, the couple got engaged later that year on Christmas Eve in Isla Grande, Colombia and announced the exciting news on Instagram.

"Best Christmas Ever!" Stiles captioned a photo showing off her engagement ring while holding hands with Cook on the beach, which she posted in early January 2016.

Stiles was reportedly surprised when Cook popped the question, but told TODAY shortly after their engagement that she was very happy (and relieved) that he proposed on their vacation.

"We went on a big trip with his entire family over Christmas and New Year's, so I kept saying to myself out loud, like every day, 'Do not ruin a perfectly good vacation by getting your hopes up. Just get it out of your head,'" Stiles told TODAY.

In the same interview, Stiles also revealed that she had a "gut feeling" about Cook and just knew he was the right guy for her.

"He's just a really good man," she continued, according to TODAY. "It's a gut feeling, I guess. But the more we spend time together, the more that's confirmed. He's just really caring and attentive and a solid dude."

With glowing compliments like that from his wife-to-be, it sounds like Cook will make a wonderful father as well.