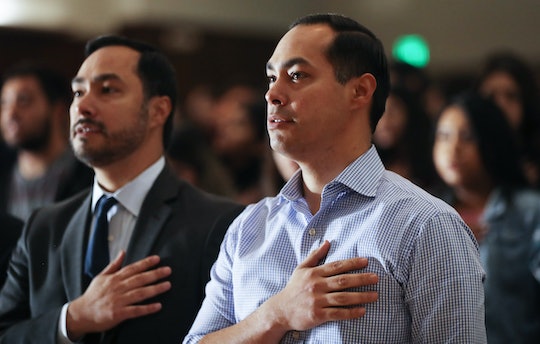 At the Democratic debates earlier this month, Julian Castro, the former Housing and Urban Development Secretary under the Obama administration, captured the nation's attention with his ideas about immigration, to name one example. And the debate has left many wondering about the candidate’s political history and policy stance, as well as the identity of his identical twin. So, who is Julian Castro’s twin?

Julian Castro's twin brother, Joaquin Castro, is also a player in the political arena, serving as a Democratic Congressman in Texas, according to NBC News. He is currently the U.S. Representative for Texas’s 20th Congressional district, which includes half of San Antonio, and he has been in office since 2013. In fact, while he was still in the state senate, Julian was simultaneously serving as the mayor of San Antonio. And prior to entering the national stage as the U.S. Representative, Joaquin also spent five terms as a state representative for the Texas Legislature, according to the Library of Congress.

Interestingly enough, it was Joaquin who first announced that his younger brother might be running for president in 2020. In a joint appearance with Julian on the CBS’s The Late Show With Stephen Colbert, the older brother jokingly responded to Colbert’s pressure to announce the presidential bid. “I'll speak on his behalf, here,” he said at the time. “He's going to run for president. ... For the FEC lawyers: He didn't say it! I said it.”

Joaquin Castro may have announced this in place of his brother because, according to the FEC, candidates who announce that they’re in the running are subject by the Federal Election Commission (FEC) to a laborious process of registering and providing campaign spending reports.

According to Politico, Joaquin had teased a possible Senate run earlier this year, first saying he was considering campaigning in March, and he reportedly met with Senate Minority Leader Chuck Schumer in April to explore the possibility.

However, the Texas Congressman recently announced that he won’t be run for U.S. Senate as an opponent to the current Republican seat holder John Cornyn, according to the San Antonio Express News. “Right now, I’m going to focus on my work in the House of Representatives. I’ve been doing what I feel is important and meaningful work here,” he said, according to Politico. “If and when I run for another office, it is likely to be something that takes me back home to Texas.”

For now, Joaquin is serving as the chairman for his brother’s campaign, according to The Texas Tribune.

In his position as a Texas representative, Joaquin has been vocal about immigration issues affecting the second-most-populous state in the nation. He has been open in his opposition to the current administration’s treatment of asylum-seekers at the border, who have been subject to family separation, unlivable conditions, and denied proper shelter.

The eldest of the twin brothers also recently spoke out against President Donald Trump, who incorrectly tweeted that a group of Democratic Congresswomen came from “countries whose governments are a complete and total catastrophe.” He added, “Why don’t they go back and help fix the totally broken and crime infested places from which they came." In response, Joaquin tweeted in a viral post, “They’re Americans. You’re a bigot.”

With outspoken brothers like Julian and Joaquin working to better the American government, 2020 is shaping up to be a promising year.