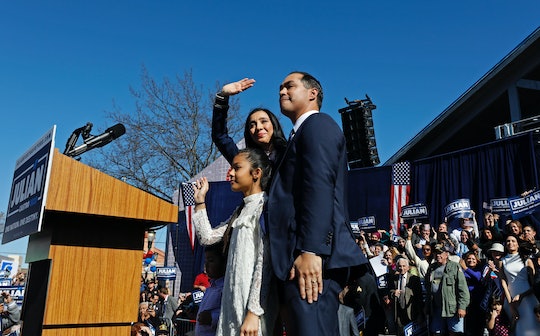 While the Democratic Party isn't expected to name its nominee until July of next year, the 2020 presidential race is already in full swing as a crowded field of candidates seeks to get familiar with voters. And as candidates kick their campaigns into high gear, many of them are bringing their families along for the ride. For example, the family of President Barack Obama's former Housing and Urban Development secretary is often seen with him at campaign events, leading some voters to wonder just who is Julián Castro's wife? Turns out, elementary school teacher Erica Lira Castro has been married to the presidential hopeful for 12 years.

Erica and Julián Castro were both born and raised in San Antonio, Texas, according to Town & Country, but despite sharing the same hometown, the two didn't meet as young kids. Instead, they met when Julián was in town visiting his mom during a summer break from Harvard Law School. Although it's unclear exactly when the two met, Harvard notes that Julián is a graduate of its class of 2000. What's more, Julian noted in an Instagram post dated from August of last year that he'd met Erica "almost twenty years ago," which would narrow the window of their meeting down to sometime between 1997 or 1999.

Julián and Erica were married on July 1, 2007 and recently celebrated their 12 year anniversary, according to a post on Erica's official Instagram account. The pair currently have two children, Carina, who is 10, and Cristián, who is 4.

In a video posted to his official Twitter account in May, Julián said his wife had been a public school educator for 15 years. According to The New York Times, she spent the last school year teaching at the Harlandale Independent School District in San Antonio's South Side.

While Julián was a member of the Obama administration, however, Erica also put her experience as an educator to work for the White House. She worked with Dr. Jill Biden on the Obama-era White House Initiative on Educational Excellence for Hispanics, which sought to improve educational outcomes for Hispanic populations of all ages. As part of that initiative, Erica sought to encourage more Hispanic people to enter the teaching profession.

"As our nation’s Hispanic student population grows, there is an increasing need for more teachers who are Hispanic, for more teachers who understand Hispanic culture and communities," she said in a promotional video released by the Department of Education in September 2015. "The White House Initiative on Educational Excellence for Hispanics is highlighting Hispanic teachers, to encourage more young people to consider a career in teaching."

A bio provided by the Department of Education, noted that Erica is a first-generation college graduate, having earned both a Bachelor's and Master's from the University of Texas at San Antonio. The agency went on to say Erica had not only taught mathematics to elementary school students for more than 11 years but also served as a teacher and mentor for pre-service teachers at the university level.

With Erica likely to continue to campaign alongside her husband, her experience as an educator in the public school system and previous work with the White House could potentially benefit his campaign as voters seek to narrow down the crowded field of Democratic presidential candidates. But could Erica be the next first lady?