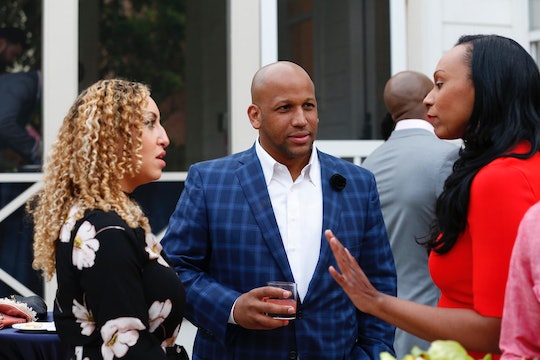 As if the original cast of Southern Charm wasn't already enough to handle, Bravo is giving fans a whole other crew down in New Orleans to keep track of. Already, it looks like they're just as much fun and drama-fueled as the group down in Charleston. So who are these people anyway, and most importantly, who is Justin Reese on Southern Charm New Orleans? He seems to be at the center of most of the action.

According to his official Bravo bio, Justin is a sports agent and personal injury lawyer in New Orleans, so he keeps busy. Justice runs in the family — his mother, Dottie Reese, is civil rights activist, who started her own law firm with another women and advocates for minorities, so his family is pretty well known in the Big Easy. His father, Kern Reese, is a judge for the Orleans Parish Civil District Court. So Justin has a lot to live up to. He told NOLA.com, "I'm a little bit of a mama's boy," so maybe she'll be on the show, too.

Already, Justin seems to have more going on than any of the original Southern Charm cast members. Like, do any of those guys even have jobs? Not so much. In addition to working hard, Justin is also trying to rebuild the home he grew up in after it was destroyed during Hurricane Katrina. He bought the home from his parents and told The Advocate that it's a really important project for him. "I have a lot of great memories growing up in that house as a child, and now I have the opportunity to start fresh," he said.

Of course, he likes to go out on the town and have a good time. It's New Orleans, after all.

Reese has a ton of degrees. He went to Morehouse College in Atlanta, then law school at Loyola University. After that, he got a masters from Temple Law School in Philadelphia. Viewers will get to see the man in action on the show, too. According to The Advocate, Reese was running his firm while filming for the show. He said in an interview, "I have an amazing staff at my law firm who was able to be there, support me and make sure the cases kept moving. But I worked some late nights too.”

Fans will get to know Justin really well, judging from the trailer for the premiere. In it, one of the other cast members, Tamrica, who is a news anchor in New Orleans and is married to Barry, a personal trainer and another cast member, comes at Justin about his relationship with his girlfriend. She asks him, "Do y’all live together now? Are you all getting married soon?" Which seems like a pretty uncomfortable subject for the busy lawyer.

Later, in a one-on-one confessional, Justin seems pretty torn up about his girlfriend and says, "Our relationship is our relationship," but whether that means things are going well or down the tubes is kind of unclear.

It's likely that Tamrica is just trying to refocus the attention on something other than her marriage, which she talks about in the trailer. She mentions that she and her husband don't sleep together anymore, saying, "When you get married, sex changes. It’s life, it’s children, it’s time..." But Barry doesn't seem to agree, chiming in with, "I think it’s a breach of contract!”

Obviously, this group of friends is not afraid to get into it with each other. Just like the original, there are tons of dinner parties, drunken fights, and a lot of really great shots of the gorgeous city. Hopefully Justin can still get some work done.