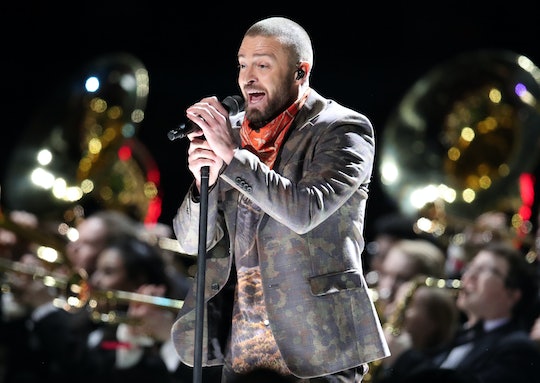 Who Is Justin Timberlake Selfie Boy? The Halftime Star Wasn’t Even The Scheduled Performer

Justin Timberlake is an internationally famous pop star. At Super Bowl LII on Sunday night, he performed a (half-posthumous) duet with Prince, a legitimate legend. But all anyone can talk about is a scene-stealing young man who didn't even get credit for accidentally headlining the event. So who is the Justin Timberlake selfie boy, and why is the internet so thoroughly entranced with him? There's no word just yet, but I'm reasonably sure that he and his parents will be Skyping in to the Today show no later than Wednesday morning.

Update: Selfie Boy has been identified as 13-year-old Ryan McKenna from Hingham, Massachusetts.

So what does it take to become an instant internet sensation? How did an anonymous kid upstage the *NSYNC alum, who had an army of backup musicians, dancers, and lighting technicians at his disposal? It's simple: Selfie Boy (yes, he deserves caps) is the personification of awkwardness. He is all of us. He represents the feeling of "derp" in a way Left Shark never could, because while Left Shark was a professional dancer who was hired to dance alongside Katy Perry, Selfie Boy was just a random fan in the audience who was suddenly thrust into the spotlight without warning, and asked to be Timberlake's scene partner. And he derped. Just like all of us would.

It's a familiar predicament: something legendary is going down, and you need a photo, now. Maybe you spotted Gary Busey on your flight. Or your baby's taking their first steps. Or you just drove past two horses kissing on the mouth. But in your excitement, you fumble, and you can't even remember how your own hands work, never mind your phone. You've been there, I've been there, and Selfie Boy has been there. But he was on live TV.

Few could fault him for what happened, and Twitter users are predicting that his social life is about to explode once he goes back to school.

Honestly, he's probably already doing OK, since he's at the Super Bowl. Nobody from my middle school ever went to the Super Bowl, and I know this because if they had, nobody would've shut up about it until graduation.

But then the former Mouseketeer hand-picked McKenna to serve as a human prop during his closing number, "Can't Stop the Feeling," so in addition to being That Kid Who Went to the Super Bowl and That Kid Who Was on TV During the Super Bowl, he's also That Kid Who Met JT at the Super Bowl, which... I'm not sure if the kids these days will be impressed by that, but at least his teachers will think he's a baller now.

Quite a few viewers noticed McKenna messing with his phone before Timberlake did, prompting jokes about what he was up to.

We'll never know for sure whether he was anticipating the singer's next move, hoping to snap a pic on the sly, or just screwing around on Candy Crush, but you've got to admit, it all worked out pretty well.

To hear McKenna himself tell it, he was absolutely paying attention to the performance (though unfortunately, not so much the television cameras). It's unclear how interested he was in the football game, though, since he booked an interview Good Morning America before it was even over.

I'm kicking myself for guessing Today, since it's really more of a GMA type of story, but the game was on NBC.

McKenna also found a moment to speak to the Twin Cities Pioneer Press, telling them that he was recording a video of Timberlake's performance when he saw the singer approaching, and was hurrying to switch to the camera app when first the world laid eyes on him. "I just thought to myself, 'I'll never get this opportunity again in my whole life,'" he told the local paper, which rudely referred to him as "little Ryan McKenna."

"It was already crazy to be at the Super Bowl in the first place," McKenna told the Press. "Then all of a sudden I'm up on the jumbotron and everyone is talking about me. I can't believe it." Good luck to you, young man. Use that fame wisely.