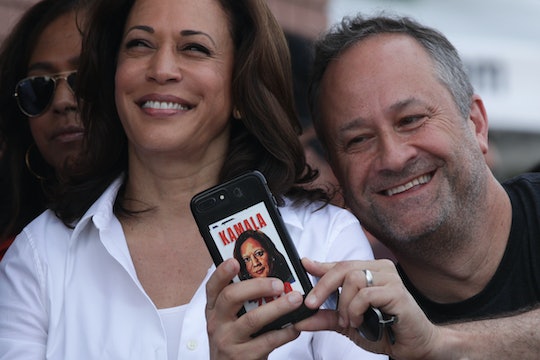 Kamala Harris' Husband May Be The Ultimate Hype Man

Since becoming Joe Biden’s 2020 running mate, California Sen. Kamala Harris has been stepping more and more into the national spotlight. As a result, folks are beginning to take note of the people in her corner — specifically Kamala Harris' husband, Douglas Emhoff, who calls himself a Harris super fan.

While Harris didn’t make her marriage or personal life — she’s close with Emhoff’s two children — a central component of her campaign, voters nonetheless took note of Emhoff early on in the Democratic presidential primary. But it wasn't Emhoff's presence on stage at rallies and campaign events that had people talking — it was his social media presence. Emhoff was, and remains, an active Harris 2020 supporter online. In fact, during the presidential primary he edited his Twitter bio to include Harris “stan” and often stressed his support for Harris’ political ambitions.

"Hmmm, who am I? Just a guy who loves and supports his wife @KamalaHarris and her career," Emhoff tweeted in July 2019 in response to a CNN segment about him. In another tweet posted in June 2019, Emhoff penned a 155 character love letter to Harris, writing, "Dear ⁦@KamalaHarris⁩: I love you, I believe in you, and I'm so proud of you. The whole country is going to see what I get to see everyday. You are amazing."

In the months that have passed since Harris was announced as Biden’s running mate, Emhoff has continued his tireless support, often campaigning on behalf of his wife and Biden.

Yep, I think it's safe to say Emhoff has Harris' back.

Of course, there are other things to note about Emhoff's life aside from his famous wife. According to Oprah magazine, Emhoff was born in Brooklyn, New York and graduated from The University of Southern California Gould School of Law in 1990 before eventually getting into entertainment litigation. A decade after graduating, Emhoff and a fellow University of Southern California alum opened their own firm in Beverly Hills, according to a report from The Hollywood Reporter. Six years later, however, Emhoff's firm would be acquired by the law firm Venable, the entertainment outlet reported.

In 2019, Emhoff was a partner at DLA Piper Law Firm, where, according to the firm's website, he practiced in both California and Washington, D.C. and represented "large domestic and international corporations and some of today's highest profile individuals and influencers in complex business, real estate and intellectual property litigation disputes." But according to Marie Claire, Emhoff has since taken a leave of absence from the firm to focus on the Biden-Harris campaign.

While stories of successful women putting aside their careers to assist their husband’s ambitions is practically a trope at this point, we rarely get to see the reverse play out in real life. Despite how uncommon Emhoff’s decision may be, he told Marie Claire he had no regrets. “Our relationship and the way I roll, my whole life has just been to support the people I love unequivocally, and they support me,” he told the magazine. “The whole thing has been based on parity and mutual respect.”

While Harris and Emhoff's love story is certainly a cute one, it didn't begin until 2013, when a friend set them up on a blind date, as Harris noted in her book, The Truths We Hold. But while a number of blind dates can be duds, this one was a success. Harris revealed in her book that the morning after her date with Emhoff, he emailed her his availability for the next few months with a note stating that he was "too old to play games."

In April 2014, Harris, then California's attorney general, announced she and Emhoff had gotten engaged after "about a year" of dating, The San Francisco Chronicle reported. At the time, Harris described Emhoff as "incredibly smart" and as having "the best sense of humor," the outlet reported. Four months later, The San Francisco Chronicle reported that Harris and Emhoff were married at a courthouse in Santa Barbara, California in a ceremony that Harris' sister officiated.

Emhoff has two children from a previous relationship who are, according to a March 2018 interview Harris did with Vogue, close to their stepmother. In fact, she told the magazine that they call her their "S-Mamala." While neither of Emhoff's children were seen campaigning for their stepmom during the presidential primary, family time is clearly important to Emhoff. In March 2019, he tweeted about taking time off from Harris' presidential campaign to spend a "daddy/daughter spring break weekend" in DC.

For now, it's not immediately clear if Emhoff will continue practicing law should he become the second gentleman of the United States. What we do know is that Emhoff is more than likely going to be sitting front and center at the University of Utah in Salt Lake City on Wednesday night to watch Harris face off against Vice President Mike Pence in the first — and only — vice presidential debate of the 2020 election.

This article was originally published on July 7, 2019