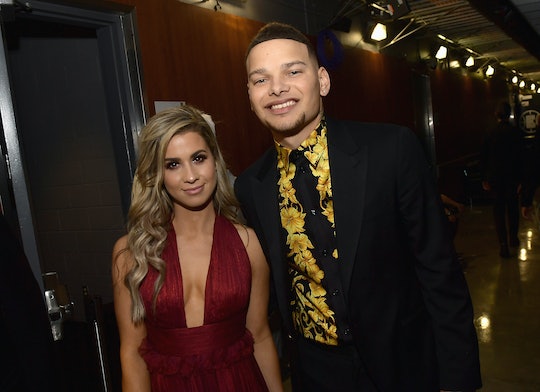 Who Is Kane Brown's Wife? Katelyn Jae Is Her Husband's Biggest Fan

There will be a lot of exciting moments that fans are looking forward to at the 2019 ACM Awards on Sunday night — including a performance from country music superstar, Kane Brown. After Brown takes the stage on Sunday night, people will probably be wondering about his personal life. And it's only natural for people to be wondering — who is Kane Brown's wife, Katelyn Jaw? As it turns out, fans might be familiar with her, because they have been there for the couple's love story, every single step of the way.

Jae has accompanied her husband to a lot of award shows. But, the 2019 ACM awards will definitely be a special night for Brown, especially. The 25-year-old singer is nominated for one award in the category, Single of The Year, for his song, "Heaven," according to Entertainment Tonight. And on top of this, he will perform on the show for the first time with his entire band, according to The Tennessean, as well as perform the song, "Good As You" with R&B singer, Khalid.

"Good As You" was written by Brown for Jae, he told The Tennessean. "It was supposed to be our wedding song," he said. So, when people see her in the crowd dancing along to the music on Sunday, fans are probably going to want to know more about her.

Here are some basics — Jae is a 26 year old singer and music management student from Pennsylvania, according to People, who loves living her life on the road, supporting her man.

Jae and Brown surprisingly first met at one of his concerts in 2015 through a mutual work friend, according to The Boot, proving you can meet the man of your dreams anywhere. Brown explained how their relationship all started to Taste of Country in 2017:

"She came to one of my shows and the first time I saw her, it was the shy giddiness. I didn't know what was going to happen. She lived in Orlando, was in Miami. I messaged her on Instagram and said, 'Hey, when are we going to hang out?' And flew her down and she hasn't left since."

Awwww. The couple seems so laid back and down to earth, which is pretty true to who they are. They're not the kind to put on a show, just because they can — Brown told Taste of Country that their first date was going to Top Golf, which is so low key.

In April 2017, just eight months after they first started dating, the couple got engaged, according to Entertainment Tonight. And right after he got engaged, Brown could not stop gushing over his bride to be.

"She's a sweet girl. She's from Philadelphia and we've been dating almost...it's going to be eight months coming up. You know, being on the road, we did 200 shows in 2016. You get lonely. Whenever she's out with me, I just have a good time. And she makes me happy. I'm never depressed when she's around me."

Sweeter words have never been spoken.

"It's incredible how effortless it is for him to get in front of so many people, especially in these arenas," Jae told Taste of Country in February. "It's pretty incredible."

She's basically living the dream and a testament to the fact that you can meet the love of your life anywhere.