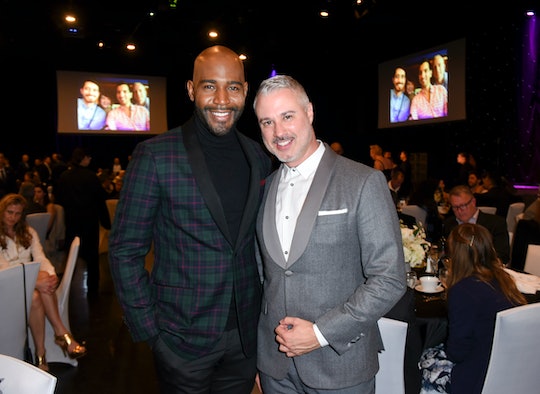 Queer Eye returns to Netflix for Season 2 on June 15, a whiplash-inducing four months after Season 1 first premiered back in February. And somehow, in addition to producing a season of reality TV in just four months, the show's culture expert and Real World alum, Karamo Brown, managed to plan and execute a lavish proposal! Naturally, his boyfriend of eight years said yes, but Queer Eye fans may be wondering in light of the news: who is Karamo's fiancé? As it turns out, he also works in entertainment.

Brown proposed to Ian Jordan back in May at a huge birthday bash he planned at sbe’s HYDE Sunset in Los Angeles. Jordan thought they'd simply be celebrating his birthday, but after a sweet tribute video played, Brown's oldest son Jason got on the mic and said to him, "We have one more gift for you. Can you just turn around?"

Of course, behind Jordan was Brown, down on one knee, sobbing and making a heartfelt proposal speech. "You are the funniest man I know, the kindest man, my biggest cheerleader," Brown said through tears according to ET, who was on hand to cover the proposal exclusively. "You made me feel like I could do anything. I hope that we can conquer the world together for the rest of our lives. Ian Lamont Jordan, will you marry me?"

Okay, have we pulled ourselves together? Good. So the scoop on Jordan is that he works in production, mostly on kids television shows. He started out in the early 2000s as a production assistant and, later, a talent coordinator on series like Spongebob Squarepants, Drake & Josh, All That, and Zoey 101. Eventually, he worked his way up to Second AD on Disney Channel flagships The Suite Life of Zack and Cody, The Suite Life on Deck, and Nickelodeon sit-com Instant Mom. He doesn't have any fresh iMDB credits after 2015, although, in his Twitter bio, he still refers to himself as an assistant director, so it's possible he's just waiting for his next big project!

The rest of the rebooted fab five were, of course, in attendance for the proposal and they posted comments of support on Brown's celebratory Instagram post.

"COULDN'T BE HAPPIER FOR YOU BOTH!" fashion expert Tan France wrote.

"Love you both so much!" added design expert, Bobby Berk.

Contested food and wine expert, Antoni Porowski, dropped eight heart emojis in the comments, and lustrously-locked grooming expert Jonathan Van Ness posted a video of the proposal to his Instagram story, saying, "Fully crying. [Brown] produced this so well." Needless to say, the fab five all seem to be huge fans of this coupling.

Brown proposed with a black and silver David Yurman ring, and he went ahead and got one for himself, too. The couple has been together for eight years, so Jordan is ostensibly already a huge part of the blended family. Brown filed for full custody of his son, Jason, and his half-brother, Chris, when Jason was 10 years old — which is when Brown first learned he had a son. According to People, he reportedly dated a girl in high school when he was 15 years old, a year before he came out. During the course of their relationship, she got pregnant and chose not to disclose the news to him at the time. He didn't know he had a son until ten years later, when Brown received a subpoena for child support.

Obviously, in the time since, the family has found stability, success, love, and, now, to-be-wedded bliss. After putting in the hard work for eight years, Brown and Jordan seem thrilled to throw a big, lavish wedding!