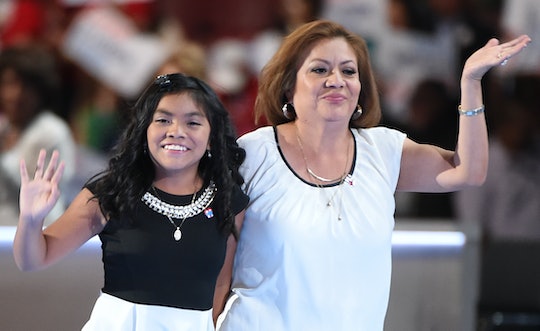 Who Is Karla Ortiz? The 11-Year-Old's DNC Speech Hit Home

There were many themes for the first night of the Democratic National Convention in Philadelphia on Monday. But one of the most moving segments was a string of speakers talking about immigration reform. You might have seen the tiniest DNC speaker for a minute on your screen, but who is Karla Ortiz? Possibly the cutest activist around.

Ortiz is 10 years old and from Nevada, where she met the Clinton campaign and eventually starred in a campaign ad. In the ad, Clinton sits with Ortiz's parents while Ortiz tells her story: she is the daughter of two undocumented immigrants, though she is an American citizen.

In the ad, she tearfully talks about her fears that her parents will be deported and that she will lose her family. Then it gets moving. Presumptive Democratic nominee Hillary Clinton calls her over and sits her on lap. Clinton tells Ortiz that she'll "do the worrying." She says that she has to be brave, every day, because her parents need her to be brave and want her to be happy.

Clinton promises the girl that she will do everything she can, as president, to make it so that the girl can rest easy and not worry about her parents disappearing and being deported one day. It's emotional. In fact, even Hillary Clinton looks like she has a stray tear in her eye.

On Monday, Karla and her mother, Francisca, took the stage and gave what one Twitter use called a "more stirring and coherent speech than a significant number of the grown-ups at the RNC."

The speech reiterated many of the points of the "Brave" spot. She said she was scared to come home and find it empty, that believes Clinton's promise that she can have the worries of a child and not "the weight of the world" on her shoulders. Karla said that wants her parents to watch her do science projects and that she one day wants to be a lawyer, to help other people. She received a standing ovation. Her mother chimed in and spoke in Spanish, again reiterating the case that the immigration system needs a major overhaul for people like to her achieve the American Dream. It was probably the most effective speeches and stances of the night.

Reactions to Karla were strong. Many applauded the girl for her thoughtfulness. And even if the campaign is sort of using her and story to get ahead in the election, it sort of worked. Because it's not just that she's pint sized and adorable, she was speaking from the heart, too.

And the closeness to her mother was also worth it: She was mouthing the words from the teleprompter as her mother spoke. Both ladies were poised and, in many ways, were able to drive the point that Republican nominee Donald Trump's immigration policies — deporting immigrants, building walls — are dangerous and serious. They humanized not just just the plight of immigrant families but also the candidate in some way. It was in stark contrast to the RNC's rhetoric last week about immigration, where a picture was painted of immigrant families as criminals and a dangerous obstacle to making America great again.

All around it was probably one of the best moments of the convention and let's hope Karla's life doesn't get disrupted by immigration policy — I want to vote for her one day.