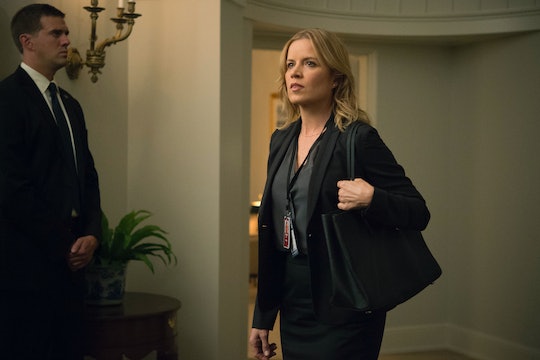 Who Is Kate Baldwin On 'House Of Cards'? Kim Dickens Is Back For Season 4

OK, fair warning before things get started here: spoilers ahead, so if you don't want this season of House of Cards ruined for you, then stop reading while you still can. After Lucas Goodwin makes an attempt on President Underwood's life after a speech on the campaign trail, his murder brings all of House of Cards' prominent journalists out of hiding. In fact, if you paid close attention, you noticed a very familiar face sitting in the crowd during the Press Secretary's address to a room filled with reporters. (If you're wondering who Kate Baldwin is on House of Cards, don't worry, I'm going to get there.) After the First Lady gives a perfectly staged (and perfectly timed) tear-laden speech that addresses the accusations made by Goodwin against President Underwood in an apparent suicide note, Baldwin takes special care to underline the part where Goodwin says the president is responsible not just for the death of Peter Russo, but Zoe Barnes as well.

On House of Cards, Baldwin plays a Pulitzer Prize-winning journalist who makes her way onto the scene and under Underwood's skin by criticizing the president's policies and the way he runs his White House. Her character played a pretty big role in Season 3. She even begins sleeping with Thomas Yates (who's working with Underwood to publish a book about the president). So why is she back on Season 4?

Here's where things get messy, and if you don't want any pieces of the show ruined for you right now, then I suggest you stop reading because there are tons of spoilers ahead! Baldwin (played by Kim Dickens) is waiting in the press room when Claire Underwood gives a heartfelt speech about her husband' status following the attempt made on his life days earlier. To recap, Underwood was shot by Lucas Goodwin, and the assassination attempt ended up killing Underwood's beloved Meechum, who took the fall for his president and is, literally, the only reason Underwood is still alive. Baldwin is, obviously, very keen on the details left behind in Lucas Goodwin's apparent suicide note, and she pays a visit to her friend (and former editor of the Washington Herald), Tom Hammerschmidt (remember him?).

What Baldwin wants more than anything is answers — and since Goodwin's death note is riddled with clues (details, which, the First Lady chalks up to "symptoms" of Goodwin's mental illness and sickness), it's a safe bet to say that Baldwin will soon be off to the races to track down answers. In fact, that's exactly what she does, but Hammerschmidt, living life well out of the public eye, is unfortunately not the support system she needed. Sure, he's just as curious, but after Underwood killed off Barnes and now Goodwin, he probably knows better than to play with fire. But something tells me that this is just the first glimpse we'll catch of Baldwin this season, and if that's true, that could be bad — very bad — for not just Frank and Claire Underwood, but for Doug Stamper too. Though the president and his First Lady have done a bang-up job ensuring their trail is squeaky clean, it's not too late for Baldwin to find out the truth.

Only question is: Will she live to tell it?