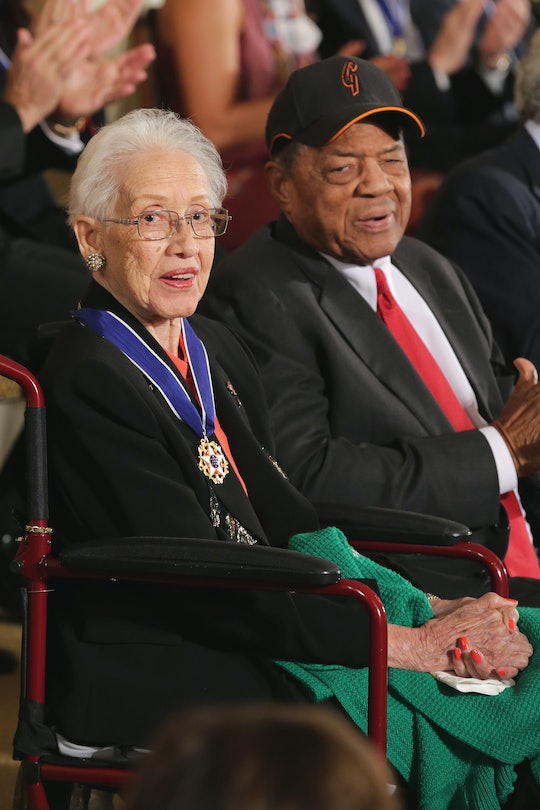 Who Is Katherine Johnson? Obama's Last State Of The Union Speech Mentioned Her, & She's Pretty Amazing

During President Barack Obama's final State of the Union address on Tuesday, Jan. 12, the president dove into the history books to evoke a sense of optimism for the future. While listing off numerous historical figures - from the Wright Brothers to Thomas Edison — the President left many viewers wondering, "Who is Katherine Johnson?" Well, for starters, she is an absolutely amazing woman.

Katherine Johnson, born August 26th, 1918 and currently 97 years young, is an American physicist, space scientist and mathematician from West Virginia. Johnson is credited with the early application of the first digital electronic computers at NASA, aiding in numerous space missions. Hailed as "The Girl Who Loved To Count", she is well known for her amazing accuracy, and successfully calculated the trajectory of both the 1969 Apollo 11 mission to the moon, as well as the trajectory for Project Mercury. Feeling inferior yet?

Johnson was first offered a job with NASA in 1953, after she decide she wanted to stop teaching and search for a career in mathematics or a math-relate field. Soon after being hired, and until 1958, Johnson worked as what can only be described as a "human computer." She analyzed multiple aspects of space missions, such as the gust alleviation for aircraft. She then accurately calculated the trajectory of the mission that put the first American — Alan Shepard — in space.

Most recently, she was awarded the Medal of Freedom for her leadership and impact on NASA, and the United State's efforts to explore and learn more about the universe.

Her career goes on and on, and is nothing but a highlight reel of poise, intelligence and amazing mathematic ability. She is a pioneer for women in science, technology, mathematics and space, and was a vital part of multiple successful missions that not only sent Americans into space and to the moon and far beyond, but ensured that they would safely find their way back home.

Basically, she's a certified, grade-A badass, and there's a reason why President Obama mentioned her in his final State of the Union speech. Simply mentioning her name evokes a sense of discovery, innovation and exploration.