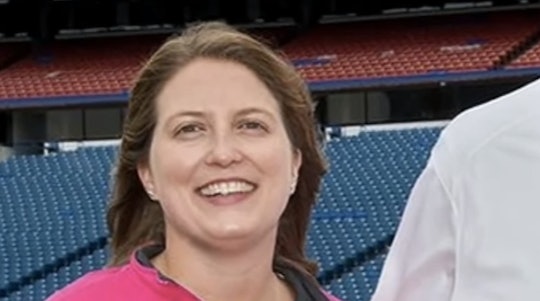 Who Is Kathryn Smith? She's The First Woman To Hold This Position In The NFL

As I watched the news this morning, I expected to hear about death (tragically), violent crimes (unfortunately), and Snowpocalypse 2016 — which, if I’m being honest, is the reason I was watching. What I didn’t expect to hear was something positive, something groundbreaking, something trailblazing: Kathryn Smith has been hired as a quality control-special teams coach for the Buffalo Bills, making her the first woman to hold a full-time coaching position in the NFL. I know what you may be thinking, “so what, it’s just football.” But it matters. Her appointment matters — for women and the NFL. So who is Kathryn Smith? She's been with the NFL for 13 years.

Smith began her NFL career in 2003, as an intern for the New York Jets, according to her LinkedIn profile. When her internship ended, she was hired as a full-time player personnel assistant, a job she held for six years.In 2014, Smith became assistant to the head coach, Rex Ryan, and when Ryan moved from the Jets to the Bills just one year later, Smith followed — so as to remain Ryan’s assistant.

But before Smith's NFL fame, she was "just a girl" from central New York. She was a three-sport athlete — in swimming, lacrosse, and bowling — at the Christian Brothers Academy in Syracuse, where her father, Robert Smith, served as the football team's statistician, according to Syracuse.com. (This means that Smith spent a lot of time "on the field," as she assisted her father in his role throughout most of her high school career.) After graduation, Smith attended St. John's University in Queens, New York, where she studied sports management and actually managed the men's basketball team.

In an interview with Syracuse.com, her father, Robert Smith, said his daughter is "very down to earth" and more than ready to handle her new role:

I think she's prepared for it. She's pretty tough. She'll let that roll right off of her, I'm sure, if she even pays any attention to it at all. You just have to know her and watch what she's done really from high school right up until now. She's always going forward, never going back.

And it seems Rex Ryan agrees. In a statement on the Buffalo Bill's website, Ryan said Smith "has proven that she's ready for the next step," according to NPR:

Kathryn Smith has done an outstanding job in the seven years that she has worked with our staff. She certainly deserves this promotion based on her knowledge and strong commitment, just to name a couple of her outstanding qualities, and I just know she's going to do a great job serving in the role of Quality Control-Special Teams.

While the Arizona Cardinals made news last summer with a similar move — they hired Jen Welter as assistant coaching intern for training camp — her coaching position ended after the team’s third exhibition game was played.

Smith's coaching promotion isn’t the first time the Bills' franchise has broken gender barriers. In 1986, Linda Bogdan joined the Bills' personnel department and became the NFL's first female scout. And, according to Ryan, the decision to promote Smith was inspired — in part — by the San Antonio Spurs' appointment of Becky Hammon, the NBA’s first full-time female assistant coach. (In 2015, Nancy Lieberman became the NBA's second female coach, hired by the Sacramento Kings.) Ryan didn't seem to see gender as any kind of hindrance to a woman's success in a sports career (because it's just not), according to NPR:

You can see the success some of these young ladies are having in the coaching profession...and realize how exciting this is for women like Kathryn Smith as well as the Bills organization.

Of course, some are questioning her "credentials" because, well, she's a woman. But not only is Ryan standing behind her, the entire Bills organization has her back — and they've been quick to respond to sexist and ignorant comments.

And with all of the negativity surrounding the NFL as of late — it has been under fire for everything from player safety to how it handles domestic and sexual violence — and gender equality still being a huge issue, especially in male dominated organizations like the NFL, it is nice to see something positive going on, both inside and outside of the locker rooms.

More Like This
Tom Hiddleston & Zawe Ashton Are Expecting Their First Child Together
The Heartfelt Details You Didn't Notice In Kate Middleton & Prince William's Portrait
6 Takeaways From The White House’s First-Ever Parents Press Conference
Is It Safe To Keep Using Period & Fertility Apps In A Post-Roe America?