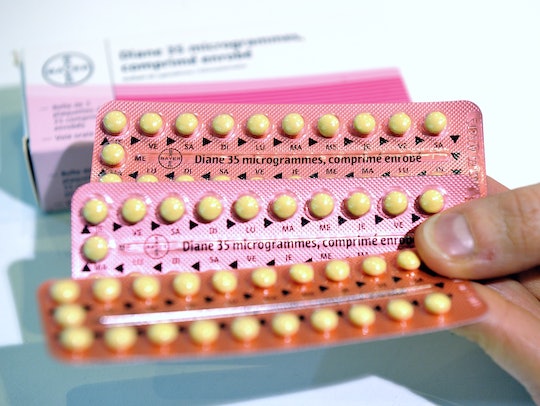 In a widely acknowledged phenomenon, President-elect Donald Trump's bid for the White House crumbled the very perception of what a "fact" is, and his election is a disaster for women's access to reproductive health care. With the newest addition to his nascent administration, the man has merged both of these disturbing truths. Katy Talento, Trump's newly named health care policy aide, has publicly asserted that common contraceptives like birth control pills cause abortions and miscarriages, as well as interfere with a woman's ability to get pregnant in the long run — all scientifically unsound claims that underscore what could happen to women's right to make decisions about their own bodies and to access the tools to do so under President Trump.

Talento joins Trump's Domestic Policy Council working on healthcare policy after working within the Senate for a dozen years and on Trump's presidential campaign since July 2016, according to an announcement posted on his transition website. Having graduated from Harvard School of Public Health and the University of Virginia, Talento is an "infectious disease epidemiologist with nearly 20 years of experience in public health and health policy, as well as government oversight and investigations and program evaluation," the announcement claims.

But despite the impressive resume and educational pedigree, Talento's claims about birth control and abortion are dubious at best. In a January 2015 column for the conservative publication The Federalist, Talento makes a claim that Talking Points Memo's Kristin Salaky categorized as "bogus." "Preventing a fertilized egg (i.e. after conception) from hunkering down in the wall of the uterus, where it can grow normally," Talento wrote in the piece, titled "Miscarriage of Justice: Is Big Pharma Breaking Your Uterus?" "Progestin in birth control thins the endometrial lining (uterine wall), but a fertilized egg needs a thick, fluffy, blood-rich uterine wall to attach to and begin growth. Without it, the embryo can’t survive, and a miscarriage occurs."

This, according to The American College of Obstetricians and Gynecologists, is simply not true. Still, Talento's vigorous opposition to birth control aligns with her background: According to STAT News, Talento's most recent Senate gig was as a legislative director for Republican North Carolina Sen. Thom Tillis, who is a noted opponent of reproductive freedom.

Talento's appointment to a prominent health care policymaking position within the Trump admin comes as Republicans gear up to strip federal funds from women's reproductive health care provider Planned Parenthood, potential legislation on which Trump has vowed to sign off, according to The Washington Post. Another main goal of this presidency is to repeal President Obama's Affordable Care Act, which makes it possible for millions of Americans to have health insurance in addition to making birth control, crucial preventive care, and maternity services accessible under individual insurance plans.

Employing Talento further exemplifies how serious Trump and his team are about undermining women's bodily autonomy and limiting the availability of safe, effective forms of birth control.

More Like This
Here Are Parents' Top Trending Searches In 2022, Because Google Really Is Our BFF
How To Watch Santa Claus Is Comin' To Town In 2022
Lizzo's Mom Gushes About Her Daughter As A “Champion Of Others” Who “Builds You Up”
How To Watch 'Rudolph The Red-Nosed Reindeer' This Holiday Season