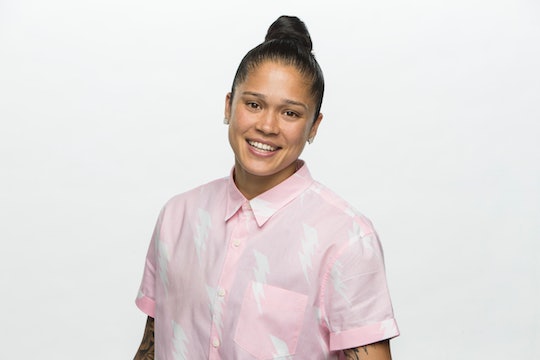 Kaycee Clark Is Shaking Up The 'Big Brother' House

Although Big Brother is a very popular show, it's been criticized over the years for it's lack of diversity, both in race and sexuality of its contestants. Most often the majority of the contestants on the show are white and straight. That's why this year many fans are excited that Kaycee Clark will be competing, but who is Kaycee on Big Brother?

Kaycee is the first openly gay female contestant to be cast on the show since 2015 when Vanessa Rousso competed, according to Out Sports. When she's not competing for $500,000 on Big Brother, Kaycee is playing professional football as a wide receiver for the San Diego Surge of the Women's Football Alliance. She's played for the Surge in six of the past eight seasons.

In her cast bio, Kaycee describes herself as fun, positive, and athletic — all of which will help her in the house. Though it's doubtful that any of the competitions will have to do with football there are endurance comps that will require Kaycee's strength. Plus, her fun and positive attitude should help her social game, and hopefully she'll be able to make friends with the right people who'll help her get all the way to the end of this game.

For Kaycee, she believes the hardest part of this game will be learning how to trust strangers and accepting the fact that people will be talking about you behind your back. Other than that, Kaycee's confident she'll be able to adapt to the conditions in the house. As for her favorite past houseguest, Kaycee chose Cody Nickson from last season.

"He was different and such a badass," she said. "He went against the grain when everyone else in the house wanted to follow Paul Abrahamian because he was a previous cast member. Cody was a competition beast. I mean, the only thing I would say is he could've had a better social game."

It's clear Kaycee plans on learning from Cody's mistakes. Her strategy for winning the game is using her social skills. "I am a big-time people person," she said. "I also want to be as honest as possible in the game. I am a loyal person in real life and I want to stick to that as much as I can." Well that's certainly an honorable idea, it'll be interesting to see if Kaycee sticks to it.

It's hard to win Big Brother and play an honest game at the same time. Houseguests are always plotting and scheming, trying to figure out how to send someone home, and it's hard to work against someone and be honest with them at the same time. That's not to say it hasn't been done before, and if Kaycee plays her cards right and makes it all the way to the final two without a bitter jury, she could very well win this game.

In addition to playing an honest game, Kaycee also plans on laying low and not putting a target on her back early on in the game. She's also "looking to align with some people where I feel the vibes are right and legit." As for her life motto, Kaycee says, "Think outside the box, take risks, and never give up." That's definitely a great motto to have going into the house.

If she could, Kaycee would bring pictures of her family, her Jordan sandals, and her pre-workout supplement into the house. Some fun facts about Kaycee include the fact that her mom is Filipino, Big Brother is the only TV show she watches, and it's a tradition to watch it with her dad.

You can meet Kacyee and the other houseguests when Big Brother premieres on Wednesday night at 8 p.m. EST on CBS.